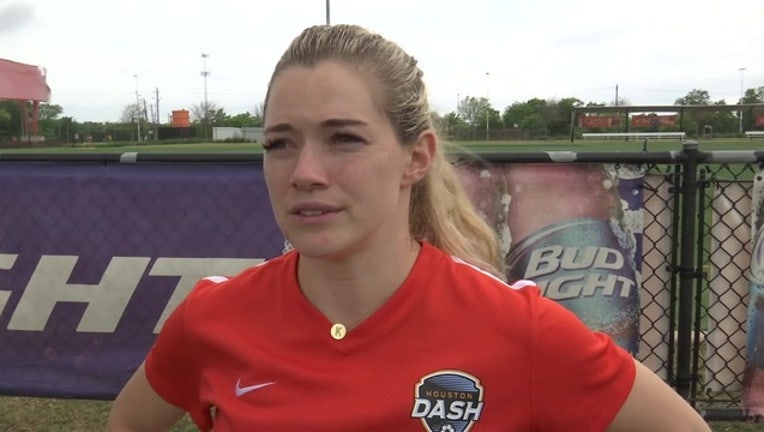 HOUSTON (FOX 26) - After suffering a left knee sprain and meniscus tear during the Houston Dash match on Saturday against the Orlando Pride, forward Kealia Ohai will miss the remainder of the 2017 National Women's Soccer League season.

Ohai specifically suffered a left knee Grade 3 anterior cruciate ligament sprain and medial meniscus tear during the second half of the Dash-Pride match.

The injury report serves as additional bad news for the Dash which is currently 9th in the NWSL standings. Omar Morales took over as interim head coach for the Dash after the club and former head coach Randy Waldrum mutually parted ways on May 29.

During her ten starts with the Dash this season, Ohai has scored two goals and been credited with two assists. She will be placed on the disabled list for the remainder of the season.

"I'm devastated by the news, but also excited for this challenge," said Ohai. "Thank you to the fans for all of your kind words of support. It means so much to me. I will do everything in my power to get back on the field, better than ever."

"The injury to Kealia is a big hit to the team, not only on the field but off the field due to the leader that she is," said Morales. "With her being the captain, you are losing a big piece of your team. We have to stay strong for her, push for her, win some games and build on the momentum from Saturday. We will keep her in mind because she has done so much for us this year."

Ohai is the final remaining member of the original Dash squad from 2014 and was the second overall pick in the 2014 NWSL Draft out of North Carolina, She has played in 72 matches, 67 of them starts, in her four-year career, allowing her to hold club records for games played, games started and goals scored with 21.

The next match for the Dash will be on Wednesday at BBVA Compass Stadium when the team hosts the Boston Breakers on Pride Night. The match will be the second part of a Dynamo and Dash doubleheader, with the Dynamo's Lamar Hunt U.S. Open Cup match kicking off at 5:30 p.m. and the Dash match starting at approximately 8 p.m.