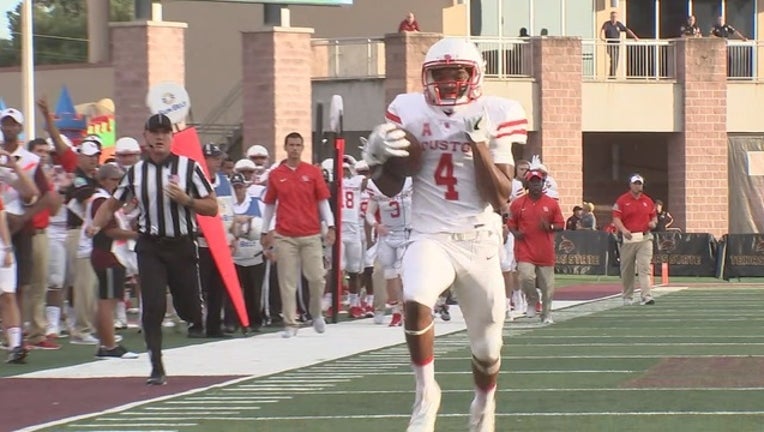 D'Eriq King had touchdowns via reception, pass, and kick return against Texas State.

SAN MARCOS, Texas (AP) -- Had Houston's season gone as planned, D'Eriq King would have spent Saturday night standing on the sideline as the Cougars' third-string quarterback.
Instead, King caught a touchdown pass, threw for a TD and returned a kickoff for another score and No. 6 Houston cruised to a 64-3 victory over Texas State to remain undefeated.
King is the first Houston player ever to pass, run and return a kickoff for a touchdown in the same game. The freshman was recruited to play quarterback but moved to wide receiver after the Cougars lost two receivers to injuries.
"If I played quarterback, I might have redshirted," King said. "I really like what I'm doing now."
Greg Ward Jr. passed for two touchdowns and ran for one before leaving the game after playing one series in the third quarter. He completed 20 of 26 passes for 289 yards.
King made a mistake by calling for a fair catch on the Houston 5 during a first-quarter Texas State punt. He soon made up for that, however, catching a short pass from Ward on a bubble screen and taking it in for a touchdown from 48 yards out.
Early in the second quarter, King took a handoff from Ward and threw a high pass to the end zone that Steven Dunbar pulled in for a 15-yard touchdown.
King began the second half by returning the kickoff 99 yards for another touchdown.
Regardless of his versatility, Houston coach Tom Herman said King will someday return to quarterback.
"The second the clock hits double-zero in our bowl game he's going right back to the quarterback meeting room," Herman said. "I think the kid has a chance to be a tremendous quarterback."
Houston (4-0) gained 563 yards and limited Texas State (1-2) to 142. Texas State's Tyler Jones completed 17 of 30 passes for 100 yards.
"Houston is a talented team that plays hard," Texas State coach Everett Withers said. "We've got a lot of work to do."
THE TAKEAWAY
HOUSTON: The Cougars , who came in as five-touchdown favorites, have handled two overmatched opponents (Lamar and Texas State) and two tougher ones (Oklahoma and Cincinnati) with aplomb so far. The margin of victory against Texas State was the largest for Houston since beating Louisiana Tech 73-3 on Aug. 31, 1991.
The Cougars scored all seven times they reached the red zone.
"I was really proud of the offense," Herman said. "The last couple of weeks they had a habit of shooting themselves in the foot and not finishing drives."
TEXAS STATE: With the loss to Houston, the Bobcats are 0-5 against Top 25 teams since moving up to the Football Bowl Subdivision in 2012.
Withers said this one stings.
"I want them to feel hurt, and if they don't we have a real issue," Withers said. "It hurts me like someone just stuck a knife in my heart and I hope they feel just as bad. Some guys have that hurt, but not all of them. We have some major stuff to fix."
POLL IMPLICATIONS
HOUSTON: The Cougars are likely to remain at No. 6 . Everyone ahead of Houston this week won.
ATTENDANCE RECORD
Announced attendance was 33,133, a record for Bobcat Stadium since it was expanded to accommodate Texas State's move to the FBS in 2012. The previous record of 33,006 was set against Texas Tech in 2012.
INJURY UPDATE
Freshman Mulbah Car, a backup running back for Houston, suffered a knee injury, but Herman said a preliminary diagnosis indicated it is not too serious. Herman estimated Car would miss a few weeks.
UP NEXT
HOUSTON: The Cougars have their second quick turnaround of this season when they host Connecticut in an American Athletic Conference game on Thursday. Houston had a Saturday-Thursday turnaround against Lamar and Cincinnati for its second and third games of the season. UConn handed Houston its only loss last season, 20-17, in East Hartford.
TEXAS STATE: The Bobcats play host to FCS Incarnate Word from San Antonio next Saturday.