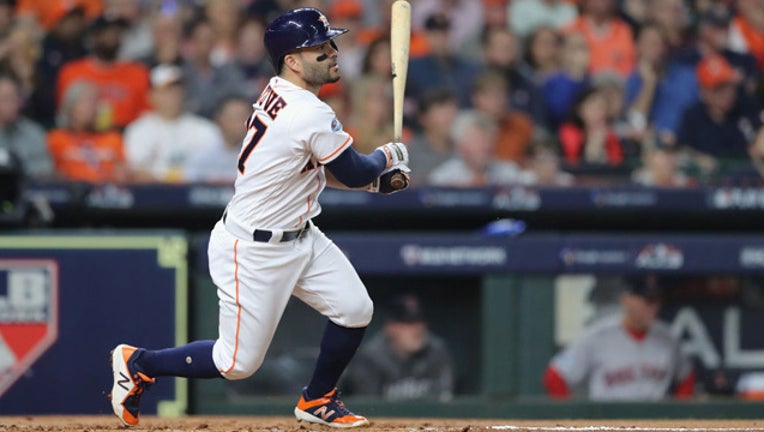 Jose Altuve #27 of the Houston Astros hits a single in the first inning against the Boston Red Sox during Game Five of the American League Championship Series at Minute Maid Park on October 18, 2018 in Houston, Texas. (Photo by Elsa/Getty Images)

MLB sources told FOX 26 the surgery was for a patella avulsion fracture.

According to mayoclinic.org an "aversion fracture occurs when a small chuck of bone attached to a tendon or ligament gets pulled away from the main part of the bone."

Altuve had to deal with that very sore knee during the postseason and much of the second half of the year..

The injury was severe enough that manager A.J. Hinch told the media during the ALCS, if this were the regular season Altuve would probably have gone on the disabled list.

“I think he’s gained, if he didn’t already have it, respect from everyone that watches baseball in the United States, and the whole world really,” Astros third baseman Alex Bregman said Wednedsay. He’s playing on one knee, competing every at-bat, busting his butt down the line. That’s a leader right there. He’s somebody that I look up to and everybody else in this clubhouse looks up to.

The Astros released the following statement on Saturday:

Altuve is expected to make a full recovery and to be ready to play for Spring Training. He missed 21 games while on the Disabled List from July 28-August 21 due to discomfort in his right knee. It marked the first time that Altuve had spent any time on the DL in his Major League career, which began in 2011.

The six-time All-Star and 2017 AL MVP has played 1,119 regular season games in his Major League career.