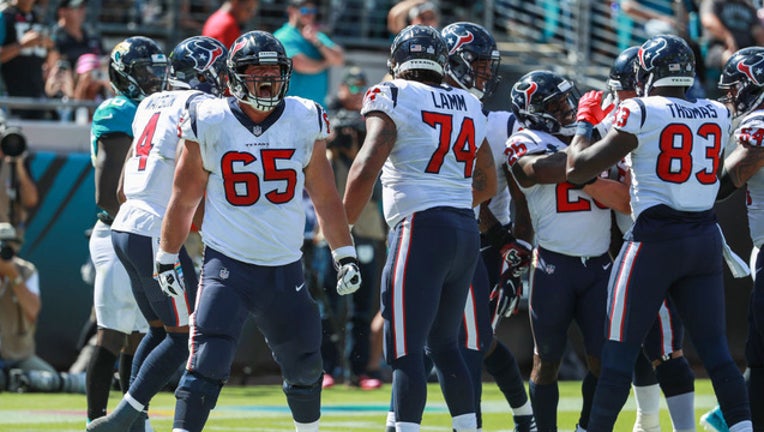 JACKSONVILLE, FL - OCTOBER 21: Greg Mancz #65 of the Houston Texans celebrates a first half touchdown against the Jacksonville Jaguars at TIAA Bank Field on October 21, 2018 in Jacksonville, Florida. (Photo by Scott Halleran/Getty Images)

JACKSONVILLE, Fla. (AP) - Blake Bortles fumbled on Jacksonville's third play of each half, leading to 10 points and his benching in a 20-7 loss to the streaking Houston Texans on Sunday.

The Texans (4-3) won their fourth consecutive game thanks to those two turnovers and took a one-game lead in the AFC South.

Deshaun Watson, who reportedly made the 800-mile road trip by bus instead of plane, had a touchdown pass despite playing with a bruised lung and injured ribs. Lamar Miller ran for a season-high 100 yards and a score .

Cody Kessler replaced Bortles in the third quarter and threw a short touchdown pass to T.J. Yeldon , creating speculation he might supplant Bortles in the starting lineup.

The Jaguars (3-4) signed Bortles to a three-year, $54 million contract in February with the belief he was good enough to lead the defensive-minded team back to the playoffs. Bortles has been downright awful in three straight losses, with two touchdown passes and eight turnovers.

Coach Doug Marrone clearly had seen enough when he made the switch Sunday. Marrone also benched Bortles in the 2017 preseason, only to give him the starting job back nine days later.

Bortles played turnover-free football in the postseason, gaining top executive Tom Coughlin's confidence and landing the new contract. Now it's unclear how much of the money he will get.

Bortles lost the ball both times trying to scramble. The first one led to a field goal, and Watson connected with DeAndre Hopkins for a 10-yard score following the second one . That was one of several one-on-one matchups Hopkins won against talkative cornerback Jalen Ramsey.

Hopkins' best was a one-handed catch for 31 yards along the sideline in the first quarter.

The Texans led 13-0 at the break, the third time in as many games Jacksonville has failed to score before halftime. The Jaguars had never done that previously in franchise history.

They also had scoreless halves against Kansas City (24-0) and Dallas (20-0), so the Jags were outscored 57-0 in the first half in three straight weeks.

Texans safety Andre Hal, who returned to practice this week following treatment for Hodgkin's lymphoma, was in the starting lineup. Hal was diagnosed with the disease in May and immediately began treatment. He received the news of his remission last month.

The 26-year-old Hal, a seventh-round draft pick from Vanderbilt in 2014, is in his fifth year with the Texans. He started all 16 games last season and had three interceptions.

Texans: WR Keke Coutee left in the second quarter with a hamstring injury and was ruled out at halftime.

Jaguars: CB Tyler Patmon was ruled out in the second quarter because of a strained neck, forcing rookie safety Ronnie Harrison into a bigger role. ... Backup linebacker Donald Payne injured in his left knee on a special teams play. ... DE Calais Campbell left the game in the fourth with a stinger.

Jaguars: Face Philadelphia in a "home game" at Wembley Stadium in London.