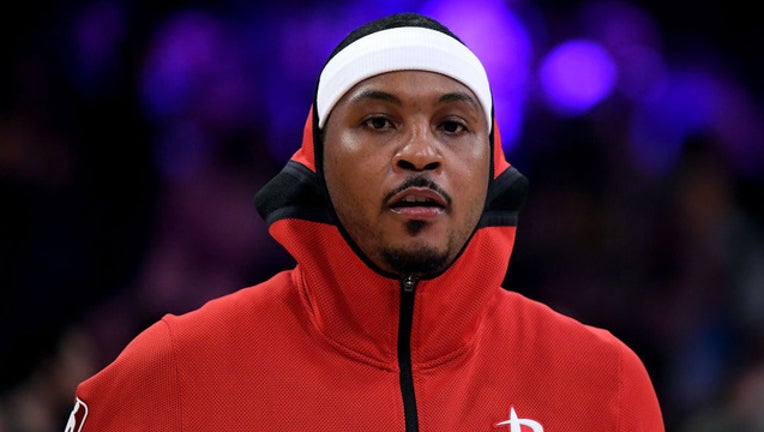 LOS ANGELES, CA - OCTOBER 20: Carmelo Anthony #7 of the Houston Rockets warms up before the game against the Los Angeles Lakers at Staples Center on October 20, 2018 in Los Angeles, California. (Photo by Harry How/Getty Images)

Rockets general manager Daryl Morey released a statement Thursday saying the team is "parting ways" with Anthony and "working toward a resolution."

Anthony played just 10 games for the Rockets after signing a one-year, $2.4 million deal during the offseason.

"Carmelo had a tremendous approach during his time with the Rockets and accepted every role head coach Mike D'Antoni gave him," Morey said. "The fit we envisioned when Carmelo chose to sign with the Rockets has not materialized, therefore we thought it was best to move on as any other outcome would have been unfair to him."

Anthony was traded from the Oklahoma City Thunder to the Atlanta Hawks in July before the Hawks released him to clear the way for him to sign with the Rockets.

Houston star James Harden said he liked having Anthony on his team but that the decision was out of his hands.

"It's one of my friends. He's a great guy, great teammate," Harden said. "It just didn't work out. It's part of the business."

Houston thought he could be the piece it needed to finally get past Golden State and win its first championship since back-to-back titles in 1994-95. Instead the Rockets limped out to a 6-7 start and the emergence of undrafted rookie Gary Clark made it appear that Anthony would have to take a reduced role.

In the end the Rockets decided it would be better to move on than to force Anthony to do that.

"We just had to see how things worked out," D'Antoni said. "And the way we play probably wasn't conducive to his game and he was trying to make the necessary sacrifices and it wasn't fair to him as a Hall of Fame player to play in a way that wasn't good for him, wasn't good for us. It just wasn't a fit."

The 34-year-old is a 10-time All-Star who has had a tough time over the last two seasons. He averaged a career-low 16.2 points in 78 starts in a tumultuous season for the Thunder last season before coming to Houston - and accepting a reserve role for the first time in his 16-year career.

Eight of Anthony's 10 appearances for the Rockets came off the bench after he had started all 1,054 games he'd played in his first 15 NBA seasons.

D'Antoni said he feels for Anthony that things ended this way and made it clear that it wasn't a matter of Anthony not having the right attitude in Houston.

The third overall pick in the 2003 draft has averaged 24 points, 6.5 rebounds and 3 assists in a career that also included stints with the Denver Nuggets and the New York Knicks.

Anthony sat out Houston's last three games with what the team called an illness. His last appearance for Houston came in a blowout loss to Oklahoma City on Nov. 8 when he had two points and five rebounds.

D'Antoni expects the rest of the Rockets to handle this professionally, but knows that the move will be tough on them.

"I'm sure they hate it," D'Antoni said. "There's some good friends in there and there will be friendships. But above all this is a business."

It's unclear what's next for Anthony, but Chris Paul, who has long been friends with him, knows he'll be OK.

"For Melo it's all about just him being happy," Paul said. "So wherever that is or whatever's next he's going to figure it out."