The most iconic coin toss moments in Super Bowl history

The Super Bowl coin toss has become one of the most popular proposition bets in sports history over the past five decades (and change).

MIAMI GARDENS, Fla. - The year is 1967 and Americans are tuning in to the first ever Super Bowl, hosted at the Los Angeles Memorial Coliseum.

Along with the Green Bay Packers, the Kansas City Chiefs would make history as one of the first teams to ever play in the big game. But the Chiefs would earn the unfortunate honors of not only being the first team to lose a Super Bowl, but also the first to lose the now iconic Super Bowl coin toss.

This early championship event that has become one of the most popular proposition bets in sports history over the past five decades (and change). This prop bet with 50/50 odds has produced some of the most awkward, iconic and memorable moments for the game now in its 54th year.

Here’s a look at the most unforgettable Super Bowl coin toss moments:

When Ronald Reagan tossed the coin via satellite on inauguration day

President Reagan took his oath of office in a private ceremony at the White House. hours later, he performed a coin toss for Super Bowl XIX via satellite 1600 Pennsylvania Ave.

It was the first time a sitting president ever participated in the coin toss ceremony.

2002, Heads: In 2002, George H.W. Bush became the first former commander in chief to actually perform the Super Bowl coin toss in person at the game.

The 41st U.S. president graced the field at the 36th Super Bowl, the first time the game was ever played in February.

Super Bowl XXXVI would also mark the beginning of the Patriots’ dynasty when a 24-year-old Tom Brady would lead his squad to victory over the Rams, securing New England its first Super Bowl championship.

2014, Tails: When New York Jets legend Joe Namath strolled onto the field to perform his coin toss duties for Super Bowl XLVIII, rocking a fur coat with a personality of its own, everyone knew it would be an unforgettable event.

Namath’s coat became one of the most iconic moments of the game, even spawning the creation of a Twitter account in the coat’s honor. And who could forget about “Broadway Joe’s” premature coin toss?

Luckily, referee Terry McAulay was able to snatch the coin midair so the Seahawks could still make a successful a tails call. 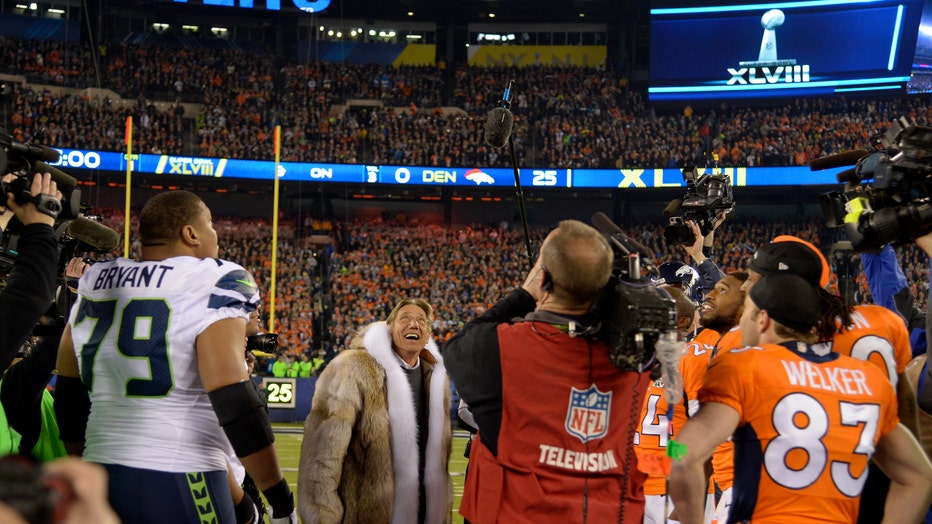 When 15 Medal of Honor recipients participated in the coin toss

2018, Heads: For Super Bowl 52, the NFL saluted 15 recipients of the Medal of Honor, the United States’ most prestigious military decoration, by giving those vets the opportunity to participate in the coin toss.

World War II veteran Hershel Woodrow "Woody" Williams — who received the Medal of Honor during the Battle of Iwo Jima — flipped the coin while surrounded by his fellow honorees.

2020, Tails: In honor of the NFL’s 100th season, this year the commission announced it would ask four 100-year-old World War II veterans to take part in Sunday’s coin toss.

Roger Goodell announced Friday that the NFL would honor the veterans’ service by allowing them to participate in the official on-field Coin Toss ceremony before the Chiefs-49ers game.

"These four men deserve our gratitude for their tremendous contributions to the United States of America and we're thrilled to recognize their service on the country's largest stage."

The Associated Press contributed to this story. This story was reported in Los Angeles. This station is owned by the FOX Corporation.