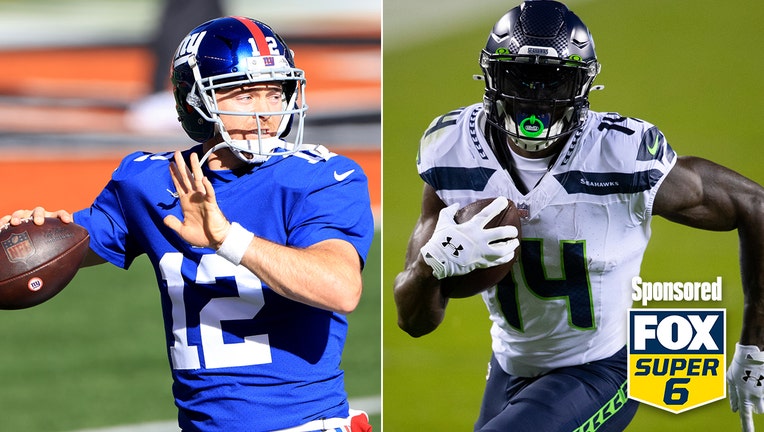 LEFT: Colt McCoy #12 of the New York Giants warms up before the game against the Cincinnati Bengals at Paul Brown Stadium on November 29, 2020 in Cincinnati, Ohio. (Photo by Justin Casterline/Getty Images) RIGHT: DK Metcalf #14 of the Seattle Seahawk

In this season of “NFL football every day of the week”, there are more chances for you to make some serious money with FOX’s Super 6 contest.

With Week 13 games stretching across Sunday, Monday and Tuesday, there are key matchups at stake as the race for playoff spots begins to heat up in the season’s final month.

This week, you could win the $100,000 jackpot if you could match the winners of all six games and the correct margins in the Super 6 contest. (The jackpot will be split among all those who get every game and margin of victory correct.)

The best part of all is it’s free. To play, all you have to do is go to the FOX Super 6 app on your phone or tablet device. When you click on the app, you will see the entry for the NFL Sunday Challenge. Just go onto the app, swipe for the team that you think will win and the margin of victory.

Here’s the six games to pick for this coming week.

Two teams heading in the wrong direction match up in Chicago, where the Bears are fighting for their playoff lives after dropping five straight games. Mitchell Trubisky was back at quarterback last week, but it didn’t really matter as the Bears were swamped by the Packers 41-25 on Sunday night in Green Bay. Meanwhile, the Lions are beginning the post-Matt Patricia era after a Thanksgiving Day firing following a 41-25 loss to the Texans on Thanksgiving. Two straight losses and four out of five to mostly teams on the outside of the playoff picture was the final straw for a team that has problems that are awful deep

New Orleans has the upper hand for home field advantage in the NFC. It is being done mostly by defense, who has held its opponents to 9.5 points per game over the last four. Tayson Hill remains at quarterback for New Orleans, who is using Alvin Kamara as a perfect deterrent to keep teams off the inexperience quarterback. Atlanta has played better since Raheem Morris came on board as interim head coach, going 4-2 since the firing of Dan Quinn. That includes a 43-6 spanking of the Raiders last Sunday where Atlanta’s defense forced five turnovers.

Who wins this matchup? With FOX Super 6, you could pick the winner of six NFL games and take a crack at big cash prizes. Download the app today.

Two first place teams clash in the Pacific Northwest. The Giants hold the top spot in the NFC East with the tiebreaker over Washington thanks to two head to head wins. However, New York will likely have to get to the finish line without Daniel Jones, who has a hamstring injury suffered in last week’s win over Cincinnati. Colt McCoy will start for New York this week. Seattle wasn’t super impressive on Monday night in a 23-16 win over the Eagles, but they did enough to never get really threatened.  DK Metcalf, however, continues to haunt the Eagles existence for passing on him twice in the 2019 NFL Draft with 10 catches and 177 yards.

Critical game in the NFC West race after both teams lost games last week on field goals at the buzzer. The Cardinals loss in New England was highlighted by some uneven play from quarterback Kyler Murray, who has been bothered by a shoulder injuries and only threw for 170 yards on 34 attempts. Kenyan Drake rushed for two touchdowns. Three thousand miles away from Foxboro, the Rams squandered their chance to hold onto the division lead with a second loss to the 49ers. Jared Goff has regressed – throwing six interceptions in the last four games after four interceptions were thrown in the first seven game.

It’s a big game for both teams and it could be a huge game for you on the FOX Super 6 app. If you pick that game and five others correctly, you could win $500,000. It’s free to play, so download today at the App Store or Google Play.

Here’s the good news for the Broncos: they should have at least one member of their quarterback room back after clearing COVID-19 protocols following last weekend’s embarrassing one passing reception against the Saints. Here’s the bad news: Patrick Mahomes will be the quarterback on the other side. The Kansas City offense was so good in last week’s win over the Buccaneers with Mahomes going for 462 yards and Tyreek Hill catching 269 yards.

A rare Monday game on a short week for the Steelers, who beat the Ravens 19-14 on Wednesday. One thing to keep an eye on, however, is the status of running back James Connor and center Maurkice Pouncey, who missed the Baltimore game after being placed on the Reserve/COVID-19 list. Washington will return to action after its impressive 41-16 win over the Cowboys on Thanksgiving to pull even with the New York Giants atop the NFC East. Antonio Gibson has emerged as a force out of the backfield for Washington, scoring three touchdowns and rushing for 116 yards against the Cowboys.

With FOX Super 6, you can pick the winner and take a shot at potentially $100,000 in prizes while playing for free. Download the Super 6 app on App Store or Google Play.