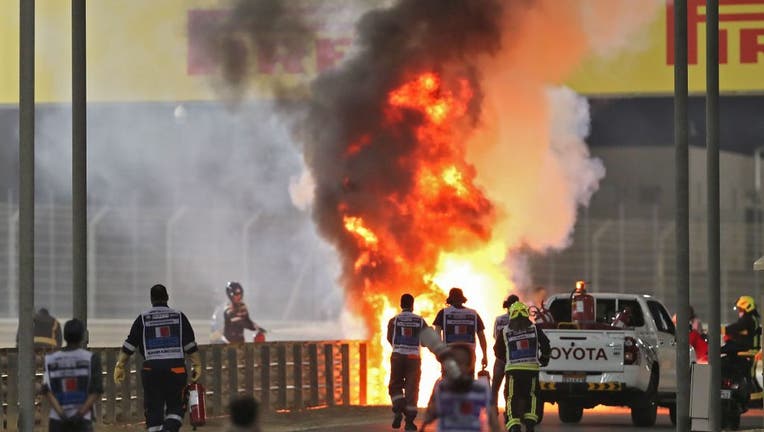 TOPSHOT - Haas F1's French driver Romain Grosjean's car burns after crashing during the Bahrain Formula One Grand Prix at the Bahrain International Circuit in the city of Sakhir on November 29, 2020. (Photo by KAMRAN JEBREILI / POOL / AFP) (Photo by

A Formula One driver miraculously escaped with only minor burns as his vehicle burst into flames moments after the start of the Bahrain Grand Prix on Sunday.

Romain Grosjean, 34, was on the first lap of the race when his car caught fire after it was sliced in two by a barrier. He had lost his grip and hit another car before driving into the barrier.

While competitors and teammates looked on in distress as emergency medical personnel made their way over to the wreckage, the French driver somehow managed to climb out of his car.

He was stuck inside the vehicle for about 10 seconds before somehow finding a way out. Officials reached Grosjean with him still inside, but he managed to push himself out of the hot seat and back onto the track.

The distressing video saw Grosjean get some help to get out of the car and into an ambulance. Early reports stated he appeared to have suffered minor injuries.

Drivers and Haas team racing members applauded when they saw Grosjean get out of the car as workers quickly extinguished the fire. Grosjean’s teammate Kevin Magnussen looked distressed watching the video of the fire while workers cleared the track of debris to get the race restarted.

A Haas racing official told Auto Sport that Grosjean only suffered minor burns to his hands and ankles. He was taken to the hospital as a precaution.

“Romain is doing okay, I don’t want to make a medical comment but he had light burns on his hands and ankles," Haas team principal Guenther Steiner said. "Obviously he’s shaken... I want to thank the rescue crews who are very quick. The marshals and FIA people they did a great job, it was scary.”

Formula One champion Lewis Hamilton expressed his relief on Twitter while waiting for the race to restart.

“I’m so grateful Romain is safe. Wow... the risk we take is no joke, for those of you out there that forget that we put our life on the line for this sport and for what we love to do,” Hamilton wrote. “Thankful to the FIA for the massive strides we’ve taken for Romain to walk away from that safely.”