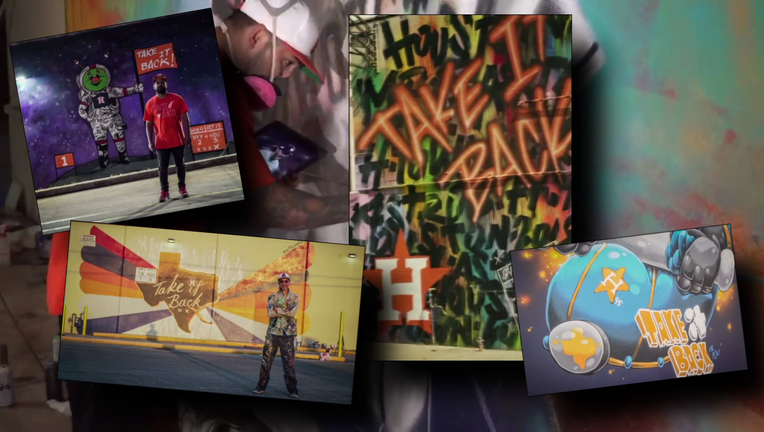 HOUSTON - A new art mural pops up in the Houston area after every Astros postseason win. So far, there have been six!

Houston's newest mural is north of Houston at Torchy's in the Market at Springwood in honor of the Astros' ALCS Game 4 win.

The sixth mural was painted by the artist Art Boy.

It’s part of an Astros partnership with local artists. After every win, the next selected artist gets to work painting a new mural in honor of that win.

A company called Muros is connecting the Astros with local artists and buildings throughout Houston. Each new location is a surprise revealed the morning after the Astros win.

The fifth mural was painted by Franky Cardona and can be seen First Colony Mall near The Lawn.

It features pitcher Gerrit Cole after his impressive time on the mound in Game 3.

New mural honors the Astros’ Game 2 win against the Yankees

Fox 26 reporter Ivory Hecker is live at the Velvet Taco on Westheimer where the new art can be seen.

Another painting went up on Sunday following the second Astros win at Yankee Stadium.

That one can be seen on the exterior wall of the Velvet Taco building on Westheimer.

With as late as Thursday and Sunday night’s games went, artists like Alex Roman, who goes by Donkeeboy, weren't able to start work on the mural until after midnight.

“It’s Orbit in an astronaut suit, and he’s out in space cheering the Astros on,” said Roman, describing his piece.

He says he pulled an all-nighter to spray paint something special in honor of the Astros ALCS Game 2 win against the Yankees.

“We has some extra innings,” said Roman. “I got to the mural site at 1 in the morning, and I finished in about four-and-a-half hours, so around 5:30 I was out of there.”

“I think it’s pretty awesome for him to jump to it as soon as the Astros won and to get out here, and to have it look like this that quickly—that turn around—I mean it’s awesome,” said David Infante, an Astros fan who brought his son to see the mural. “We thought it looked great. I thought it’d be a great photo opportunity to bring my son out here and have him take a picture with it.”

The other three can be seen on walls at Brewingz Restaurant & Bar, Lola’s Breakfast In The Heights, and Warehouse Live.