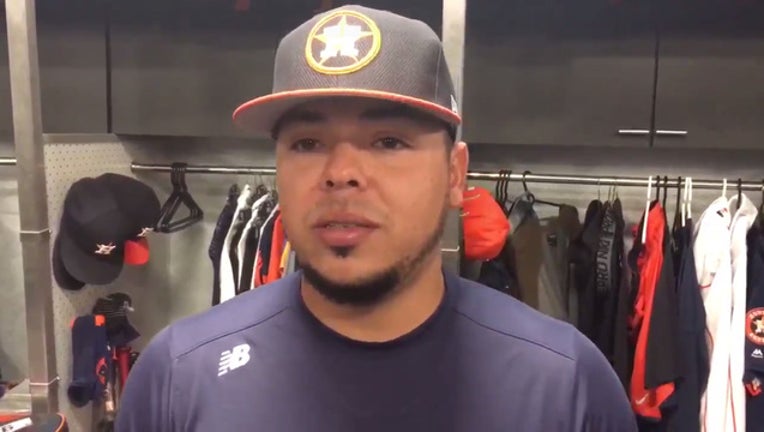 HOUSTON (AP) - Juan Centeno and Yuli Gurriel homered to help the Houston Astros to a 6-2 win over the Detroit Tigers on Tuesday night.

Centeno was making his debut with the Astros by filling in for catcher Brian McCann, who is on the 7-day concussion list. His solo home run made it 3-0 in the fourth. The Tigers cut the lead to one on a two-run homer by Mikie Mahtook in the seventh inning before Centeno singled and scored as Houston tacked on two runs in the bottom of that inning to push the lead to 5-2.

Houston starter Lance McCullers (5-1) allowed a season-low one hit in five innings to extend his American League-leading streak of scoreless innings to 22. But his early exit came after he needed 96 pitches to get through the fifth in what was his third straight start without allowing a run.

Jordan Zimmermann (4-3), who turned 31 on Tuesday, yielded five hits and four runs - two earned - in six-plus innings for the loss.

Mahtook, who had Detroit's only hit in a 1-0 loss on Monday night, cut the lead to 3-2 with his two-run homer with two outs in the seventh inning off Michael Feliz. That homer was just Detroit's second hit of the game and snapped a scoreless streak of 22 2/3 innings for the Tigers.

The Astros added a run in the seventh when George Springer hit a ball to reliever Alex Wilson and his throw to second base sailed past Ian Kinsler and into the outfield for an error that let him reach and Centeno score. Houston made it 5-2 on a sacrifice fly by Josh Reddick.

The Astros took a 1-0 lead on Gurriel's homer to left-center with no outs in the second. They added a run in the third when third baseman Nick Castellanos committed an error on a grounder hit by Jose Altuve to allow Reddick to score.

McCullers plunked Kinsler to start the game and walked J.D. Martinez with one out in the second, but didn't allow a hit until a groundball single by Miguel Cabrera with one out in the fourth. But the Tigers couldn't get anything going after that until Mahtook's homer in the seventh.

Astros: SS Carlos Correa was out of the lineup on Tuesday because he wasn't feeling well. Manager A.J. Hinch didn't specify exactly what was wrong with him, but said he "came in a little sick today," and added: "I'm not going to have him play when he's not feeling great."

Astros: Charlie Morton (5-3, 4.15) starts for Houston on Wednesday. He allowed eight hits and four runs in 5 1/3 innings of a 5-3 loss to Cleveland on Friday in his last start.