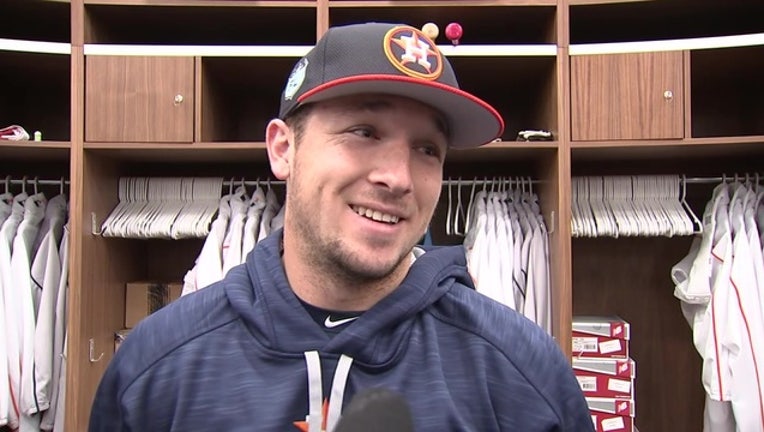 As he rounded third base on Mother's Day, he pointed toward his mom Jackie in the stands. She was raised on Long Island in East Islip, rooted for the Yankees and named the family's dog, a Labrador Retriever, after Jeter.

"Guess it was the No. 2 magic tonight," Bregman said with a grin. "My mom grew up the biggest Jeter fan ever."

George Springer led off the game with a drive into Monument Park just after Jeter's number was retired there in a pregame ceremony. Josh Reddick homered off the facing of the right-field second deck on the next pitch , and Springer also homered leading off the second. The Houston Astros built a nine-run lead and held on for a 10-7 win over New York and a doubleheader split Sunday.

Bregman homered just as Jeter was holding a news conference under the stands following the between-games ceremony, which came after the Yankees rallied for an 11-6 win in the opener. The 23-year-old third baseman, who made his big league debut last year, viewed the tribute from Houston's dugout.

"You get chills watching some of those moments: the flip, the home runs, the jump throws in the hole," said Bregman, whose only disappointment was he did not get to meet Jeter.

Houston gave Bregman the silent treatment when he reached the dugout. The Astros, a big league-best 26-12, chased Tanaka when Carlos Beltran added an RBI double with two outs in the second.

Tanaka (5-2) left to jeers with New York trailing 8-0, the most runs he allowed in his major league career. The homers tied his high.

"I didn't get my job done, so they have all the right to boo me," Tanaka said through a translator.

Backed by a 9-0 lead, Charlie Morton (5-2) gave up four runs in 5 2/3 innings, including Matt Holliday's three-run homer in a four-run fifth. Morton had 10 of the 16 strikeouts by Astros pitchers, including seven in a row, as Houston took three of four in the series. Astros closer Ken Giles got the final out in a three-run ninth, retiring Aaron Hicks on a comebacker with two on.

New York announced before the opener that closer Aroldis Chapman will be out at least a month because of left shoulder inflammation. The Yankees then rebounded from Luis Severino's poor start to stop their three-game slide and the Astros' five-game winning streak. Chase Headley, in a 1-for-24 funk, hit a tiebreaking, bases-loaded triple off Chris Devenski in a six-run seventh inning that overcame a 6-4 deficit.

"It was pretty important, not only for myself but, obviously, for the team," said Headley, whose batting average had dropped from .304 on May 5 to .256.

Looking pretty in pink in special Mother's Day uniforms, the AL East leaders trailed 3-1 before Starlin Castro's tying, two-run homer off Mike Fiers in the fourth. Aaron Judge followed with his major league-leading 14th homer, a 441-foot drive off the padding above the center field restaurant behind Monument Park.

Houston took a 6-4 lead in the seventh against Adam Warren (1-0), but New York came right back in the bottom half when Holliday hit a run-scoring infield single against Will Harris (1-1) and Castro tied it with an opposite-field double to right off Devenski. Judge was intentionally walked, Didi Gregorius struck out on three pitches and Headley sent a hanging changeup rolling to the right-center wall.

"You just tell yourself to relax and try to take a deep breath and keep everything in perspective," Headley said. "When you haven't gotten a hit in a while, it feels like it's been five years since you've gotten a hit."

Judge has a big league-high six homers of 435 feet or more. He had gone six games and 27 at-bats since his previous home run on May 3. ... Springer had his fourth multihomer game, his first since last May 26, and raised his season home run total to nine.

Astros: 2B Jose Altuve appeared to be limping slightly before he was pinch run for in the ninth inning of the second game.

Yankees: 1B Greg Bird, who hasn't played since May 1 because of a bone bruise in his right ankle, still has not been cleared to resume baseball activities.