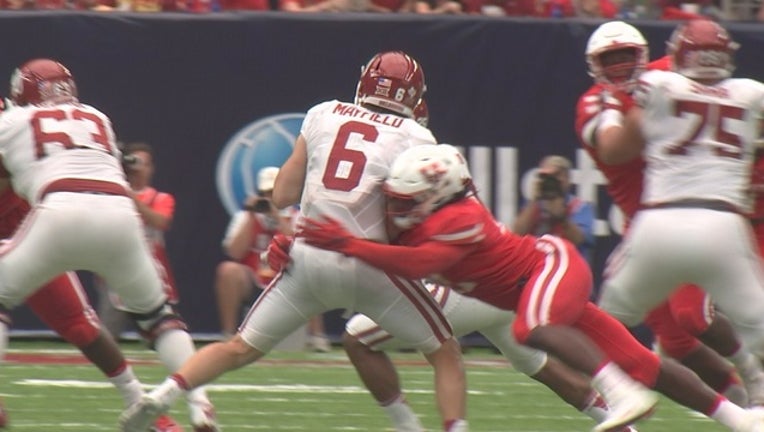 HOUSTON (AP) -- Brandon Wilson went end line to end zone to score a touchdown with an Oklahoma missed field goal and No. 15 Houston beat the third-ranked Sooners 33-23 Saturday, looking every bit ready to compete in the Big 12.
Regardless of whether Houston (1-0) ends up in the Big 12 if the conference expands, coach Tom Herman's Cougars made an opening statement that could have season-long ramifications on the College Football Playoff.
Elusive quarterback Greg Ward Jr. passed for 321 yards and two touchdowns for Houston. Wilson, though, provided the key play in the biggest regular-season nonconference game the Cougars have played in 25 years.
When Oklahoma kicker Austin Seibert's 54-yard field goal attempt came up just short, Wilson reached up to catch the ball while barely keeping his feet in bounds. Reminiscent of Auburn's Kick Six against Alabama in 2013, Wilson came flying out of the end zone, hit the sideline and hurdled a fallen teammate to score what went into the books as a 100-yard return.
"I thought I stepped out, but I didn't," Wilson said. "I just saw the green grass and I scored."
Wilson's dash made it 26-17 Cougars with 8:28 left in the third quarter.
"I was just looking for flags," Herman said. "It looked too good to be true."
Oklahoma called a timeout before trying the kick, which Herman said allowed Houston to set up for the return the Cougars practice about once a week.
"You know you have to cover it, but the personnel on the field isn't the best cover guys because the best cover guys wouldn't be able to protect the field goal. So you're in a little bit of a dilemma," Sooners coach Bob Stoops said. "I don't really second-guess. I've seen Austin make that quite a few times."
Baker Mayfield threw for 323 yards and two scores for the defending Big 12 champions Oklahoma (0-1).

Oklahoma: The good news for the Sooners is they have plenty of time and opportunities left to regroup and make another playoff run. But they need to get things fixed quickly with No. 6 Ohio State in two weeks and No. 13 TCU on Oct 1.
Houston:  After finishing last season 13-1 with a Peach Bowl victory against Florida State, the Cougars have consecutive victories against top-10 ranked opponents for the first time in school history. Playing outside the Power Five in the American Athletic Conference, Houston still will likely have little margin for error if it wants to force its way into the playoff. But this win certainly makes it look possible.

Oklahoma: The Sooners get a break next week with a home game against Louisiana Monroe.
Houston: The Cougars face FCS Lamar next Saturday at home, but they might get a little work done for Cincinnati at practice this week, too. The Cougars have a Thursday night road game on short rest against the Bearcats on Sept. 15.