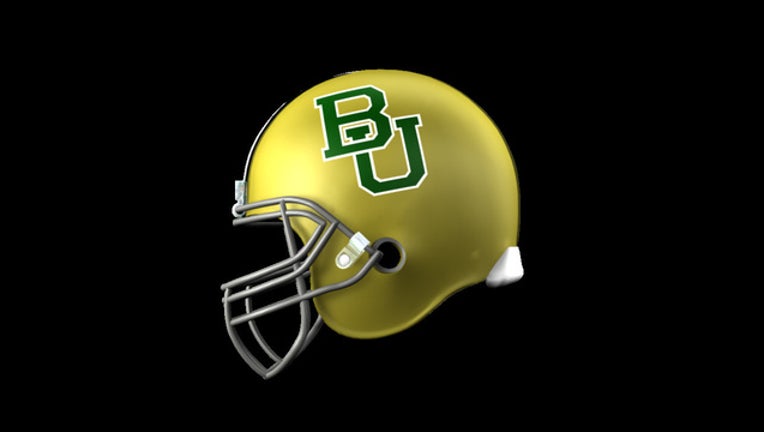 WACO, Texas (AP) - Baylor sophomore receiver Ishmael Zamora has been suspended for the first three games of the season after a video surfaced of him beating his dog with a belt this summer.

Zamora apologized for his actions, saying he was sorry that he took out his frustrations on his dog.

"This incident will never, ever, happen again," Zamora said in a statement released by the school Tuesday. "I truly love my dog, however, I know that my actions showed differently and I know that I made a big mistake. I apologize to my family, teammates, Baylor University and our fans for my actions."

When Zamora was listed as a starting receiver on the initial depth chart released Monday, acting head coach Jim Grobe said then that he was waiting for university officials before determining discipline after Waco police charged Zamora with a misdemeanor in the animal abuse case.

Grobe said Tuesday that the program does not condone that sort of behavior by anyone, and worked with university officials to hold Zamora accountable for his actions.

"We have received communications about this incident from many passionate individuals over the past 10 days, and I am aware of their concerns," Grobe said. "Our goal is for this discipline to be educational and restorative, and I believe that we have taken corrective measures to help Ishmael learn from his actions and to better understand the behavior we demand of all students at the university."

Grobe got the Baylor in May after two-time Big 12 champion coach Art Briles was suddenly dismissed following the release of a report alleging that the university mishandled complaints of sexual assault, including some against football players. The school's president and athletic director also left after that.

Since arriving, Grobe has said players would be held accountable for any off-field issues. He also promised that university officials would be involved in more serious cases, and that no longer would the football coaches and staff solely handle discipline in such instances.

Along with the suspension, Zamora will have to perform 40 community service hours in a manner that will teach him kindness and respect toward animals, undergo counseling and give the dog to an animal-friendly home. He will still be able to practice with the team during his suspension, which starts with Friday night's season opener when the 23rd-ranked Bears host Northwestern State.

Baylor, a private Baptist school, doesn't normally comment publicly on matter of student discipline, but said Zamora agreed to the release of the information about his punishment.

"Eventually, I hope that everyone can see who I really am and that I am not a terrible person," Zamora said. "This incident does not and will not define me, and I know that I am the one who will have to prove that to others in the days ahead."