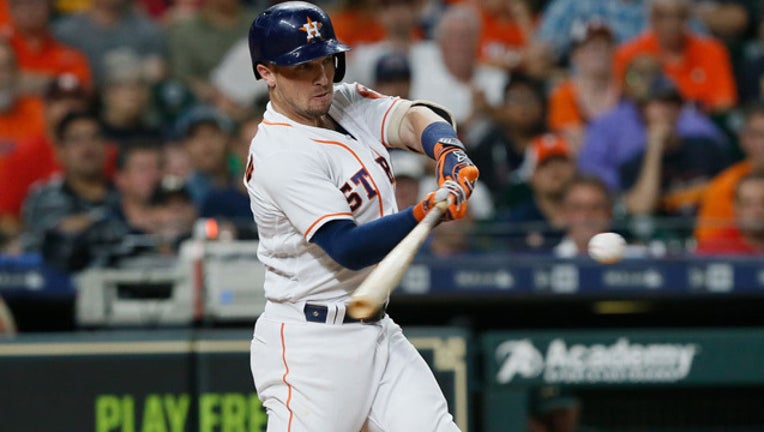 Alex Bregman #2 of the Houston Astros drives in two runs with a double in the fifth inning against the Oakland Athletics at Minute Maid Park on August 28, 2018 in Houston, Texas. (Photo by Bob Levey/Getty Images)

The A's moved within 1.5 games of the AL West-leading Astros.

Jeurys Familia (8-4) pitched a scoreless eighth. Blake Treinen worked a perfect ninth for his 33rd save.

Alex Bregman's two-out, two-run double in the Houston fifth off Edwin Jackson made it 3-all.

Matt Olson hit a three-run homer that gave Oakland a 3-1 lead in the third. Charlie Morton walked Jed Lowrie and hit Khris Davis with two outs to set up Olson's 24th home run of the season.

Houston took a 1-0 lead in the second on a groundout by Tyler White, scoring Carlos Correa.

SPRING IN HIS STEP

Astros CF George Springer made two diving catches in the first three innings. He sprinted in on Davis' shallow pop fly, diving forward to make the catch and end the first. In the third, Springer rushed to his right, diving into the left-center gap to rob Martini of extra bases.

Athletics: LHP Sean Manaea was diagnosed with rotator cuff tendinitis, and manager Bob Melvin said Manaea would not throw for "a while." Melvin said: "We're hoping to get him back sometime this season. ... Whether that happens or not, I'm not sure." . LHP Brett Anderson was placed on the 10-day disabled list Tuesday with a strained left forearm. Oakland recalled RHP Ryan Dull from Triple-A Nashville.

Astros: C Brian McCann (right knee) took batting practice before Tuesday's game. "He's back today and ready to go as soon as we either make a decision or wait until Saturday," manager AJ Hinch said. "Right now, we are leaning towards waiting until Saturday."

Athletics: RHP Trevor Cahill (5-3, 3.44 ERA) will start the series finale Wednesday, looking to rebound after allowing five runs in five innings in his last outing, a loss at the Twins on Thursday. Cahill is 1-3 with a 6.92 ERA on the road this season.