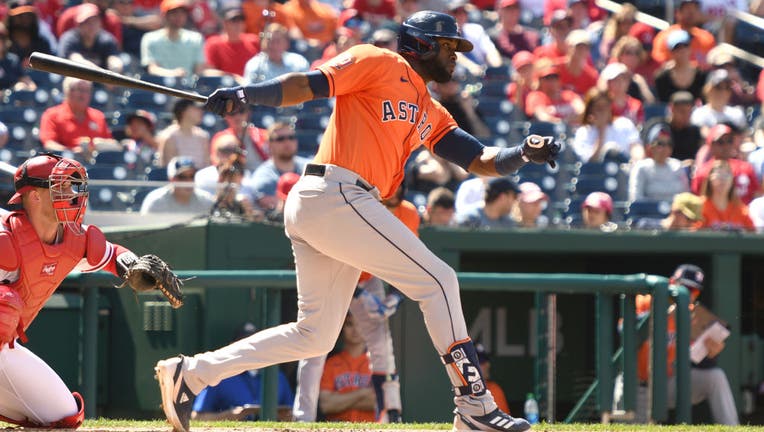 FILE: Yordan Alvarez #44 of the Houston Astros takes a swing during a baseball game against the Washington Nationals at Nationals Park on May 15, 2022 in Washington DC. (Photo by Mitchell Layton/Getty Images)

HOUSTON - Houston Astros owner Jim Crane stepped up in a big way again, getting slugger Yordan Alvarez under contract through the 2028 season.

A Major League Baseball source confirms for FOX 26 Sports that Alvarez has signed a six-year deal with the Astros worth $115 million.

This move eliminates the Astros and Alvarez of having to go through arbitration and the possibility of Alvarez leaving the franchise when he could have become a free agent for the first time following the 2025 season.

He is currently second in the American League and third in the big leagues in home runs with 14.

Alvarez is also tied for ninth in the AL in RBIs with 31.

During his brief career Alvarez has hit 75 home runs in 278 games.

In what turned out to be one of the most lopsided trades in franchise history, the Astros traded reliever Josh Fields to the Dodgers in 2016 for Alvarez.

Fields is no longer in the big leagues.

Alvarez is already one of the best sluggers in the game.