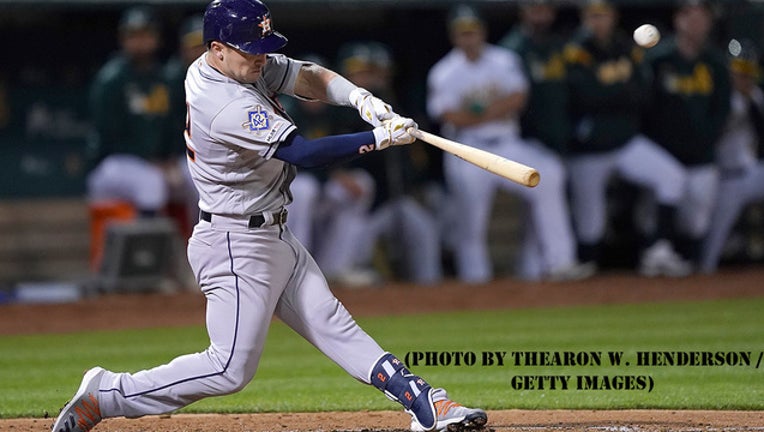 Alex Bregman #2 of the Houston Astros hits a grand slam home run against the Oakland Athletics in the top of the fourth inning of a Major League Baseball game on April 16, 2019 in Oakland, Calif. (Photo by Thearon W. Henderson / Getty Images)

BOTTOM LINE: Houston can secure a series sweep over Oakland with a win.

The Athletics are 4-8 against the rest of their division. Oakland has hit 36 home runs this season, third in the MLB. Khris Davis leads them with 10, averaging one every seven at-bats.

The Astros are 8-2 against AL West teams. The Houston offense has compiled a .277 batting average as a team this season, good for second in the majors. Jose Altuve leads the team with an average of .328. The Astros won the last meeting 9-1. Collin McHugh notched his third victory and Alex Bregman went 1-for-5 with a home run and four RBIs for Houston. Marco Estrada took his second loss for Oakland.

TOP PERFORMERS: Davis leads the Athletics with 10 home runs and has 20 RBIs. Marcus Semien has 13 hits and is batting .317 over the last 10 games for Oakland.

The Associated Press created this story using technology provided by HERO Sports, and data from Sportradar.