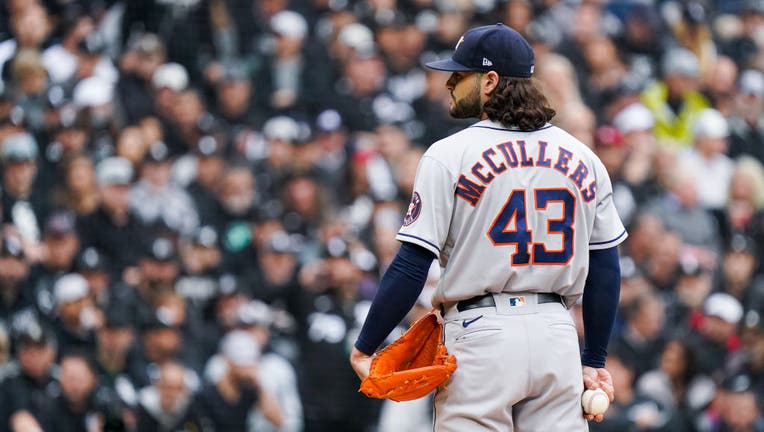 CHICAGO, IL - OCTOBER 12: Lance McCullers Jr. #43 of the Houston Astros looks on in between pitches during Game 4 of the ALDS between the Houston Astros and the Chicago White Sox at Guaranteed Rate Field on Tuesday, October 12, 2021 in Chicago, Illin

HOUSTON - Lance McCullers won’t pitch in the World Series for the Houston Astros because of a forearm strain.

After a career-high 13 wins during the regular season, when he also had a 3.16 ERA and 185 strikeouts, McCullers got hurt in the AL Division Series. He pitched 6 2/3 scoreless innings in a Game 1 victory over the Chicago White Sox but left after four innings in Game 4 with what the team said was forearm tightness.

McCullers, who was left off the AL Championship Series roster, said Monday that he and the team have known there was less than a 1% chance of him getting back for the World Series, but there was no need to write him off until they had to.

The right-hander said the type of strain he has usually means six to eight weeks before picking up a ball and throwing.

READ MORE ON THE HOUSTON ASTROS

"Tried to push it as far as we could, just couldn’t make it back to throwing," he said.