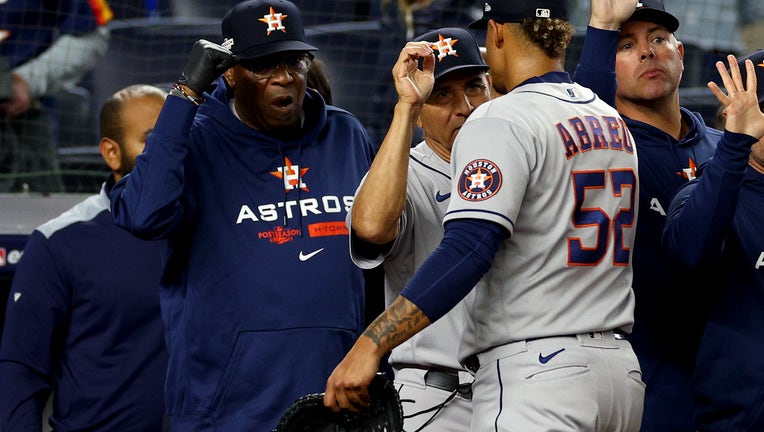 Justin Verlander, Jose Altuve, and Chas McCormick share their thoughts in the Astros clubhouse after taking a commanding 3-0 lead over the Yankees in the American League Championship Series. 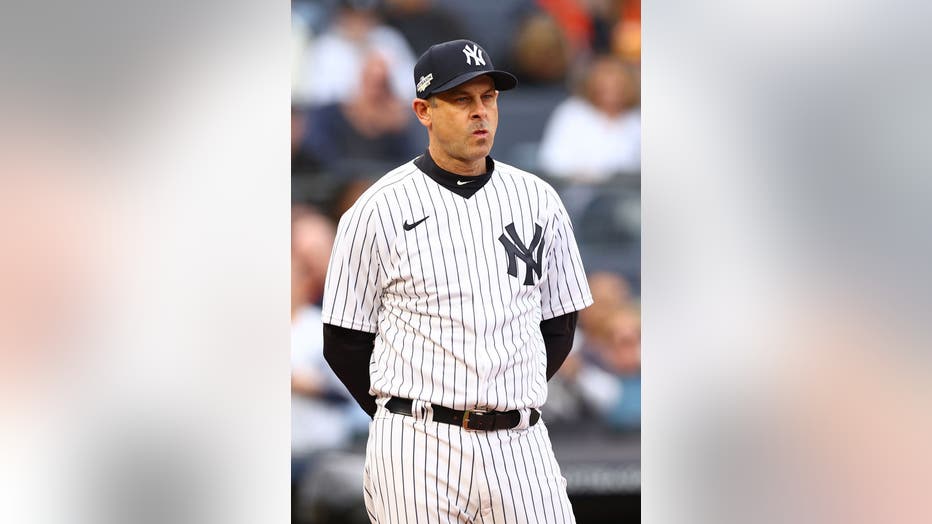 NEW YORK, NEW YORK - OCTOBER 22: Manager Aaron Boone #17 of the New York Yankees looks on prior to game three of the American League Championship Series against the Houston Astros at Yankee Stadium on October 22, 2022 in New York City. (Photo by Elsa

The 106-win Astros, trying for their second straight AL pennant, improved to 6-0 this postseason. On the verge of reaching the World Series for the fourth time in six years, manager Dusty Baker's team aims to close out the series on Sunday night when Lance McCullers Jr. starts against Nestor Cortes. Only once in major league history has a team overcome a 3-0 postseason series deficit, Boston against the Yankees in the 2004 ALCS.

Christian Vazquez added a two-run single and Trey Mancini a sacrifice fly as the Astros chased Cole in the sixth inning and opened a five-run lead.

Javier pitched seven innings during the Astros' combined no-hitter at Yankee Stadium on June 25 and was nearly as sharp this time. He didn't allow a ball out of the infield until Giancarlo Stanton's one-out double in the fourth -- the only hit Javier allowed.

Hector Neris, Ryan Stanek, Hunter Brown, Rafael Montero, and Bryan Abreu finished with scoreless relief. The Yankees got a pair of two-out hits in the ninth.

New York, which last reached the World Series in 2009, is on the precipice of elimination against Houston for the fourth time in eight seasons. After sprinting to a 61-23 record in early July, the Yankees spiraled to a 38-40 mark the rest of the way and have sputtered in the playoffs.

Judge, who set an AL record with 62 home runs during the regular season, went 0 for 4 and dropped to .156 with 14 strikeouts and three RBIs in the postseason, including 1 for 12 against the Astros. The Yankees are hitting .128 in the ALCS with 41 strikeouts and have lost eight of 10 to Houston this year, throwing just 13 pitches with a lead. 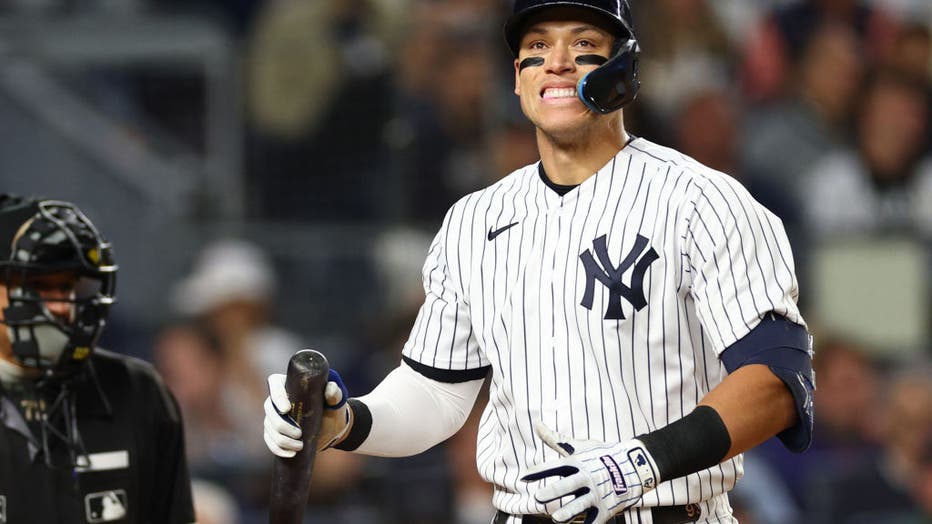 NEW YORK, NEW YORK - OCTOBER 22: Aaron Judge #99 of the New York Yankees reacts after striking out against the Houston Astros during the fourth inning in game three of the American League Championship Series at Yankee Stadium on October 22, 2022 in N

Gold Glove center fielder Harrison Bader made a costly error in the second inning and was caught stealing second by Vazquez after a leadoff walk in the fifth. 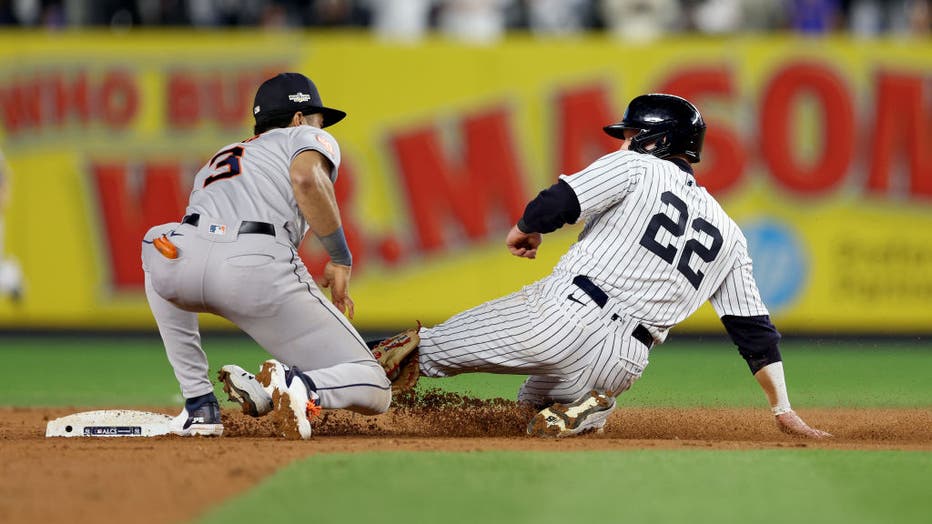 NEW YORK, NEW YORK - OCTOBER 22: Jeremy Pena #3 of the Houston Astros tags out Harrison Bader #22 of the New York Yankees as he attempted to steal second base during the fifth inning in game three of the American League Championship Series at Yankee

As Bader was about to catch Vazquez's two-out fly to right-center in the second, Judge cut in front of Bader and the ball popped out of the center fielder's green glove. Vazquez, thinking he was out, had already started cutting across the infield grass toward Houston's dugout on the third-base side, then retreated to first. 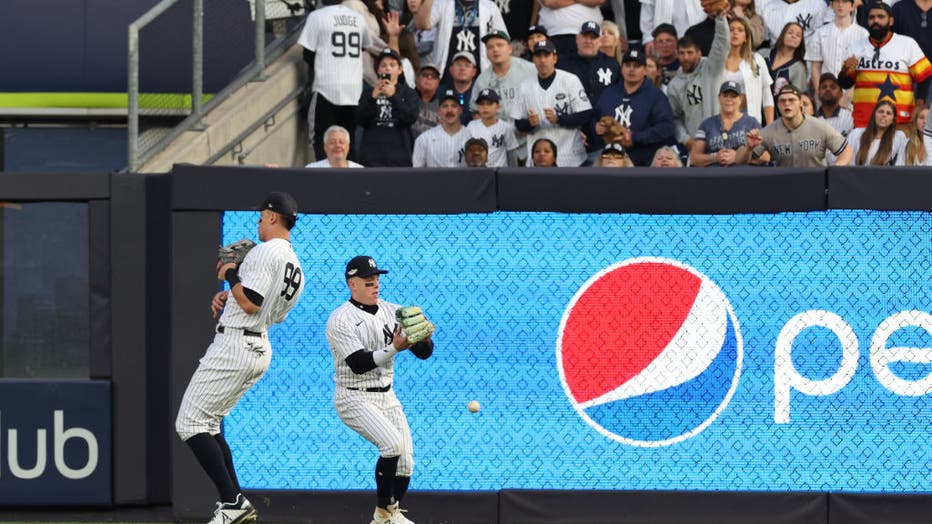 NEW YORK, NEW YORK - OCTOBER 22: Harrison Bader #22 and Aaron Judge #99 of the New York Yankees are unable to catch a fly ball hit by Christian Vazquez #9 of the Houston Astros (not pictured) during the second inning in game three of the American Lea

McCormick, the No. 9 hitter, hit a fastball 335 feet to the opposite field, and the ball hit the right-field short porch and bounced into the seats for his second home run of the series. Astros teammates celebrated in the dugout with the Chas chomp -- exaggerated clapping with arms spread wide. 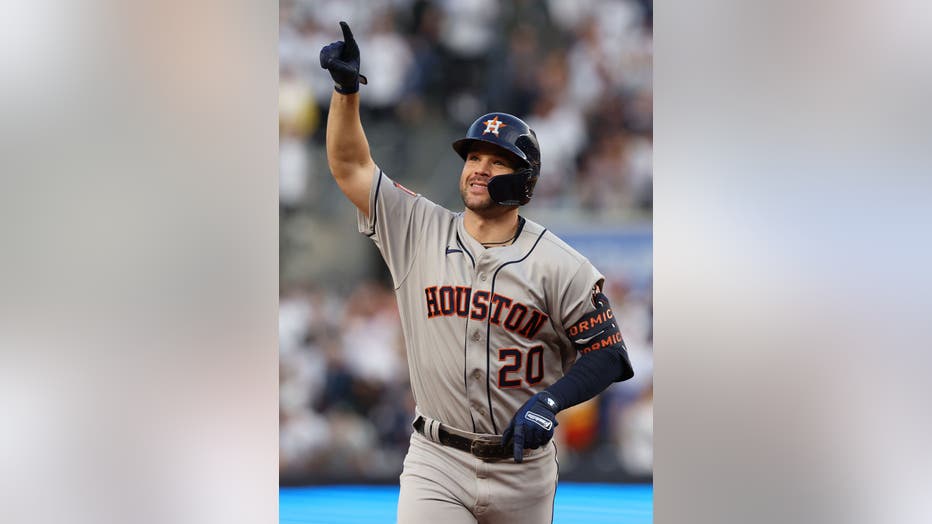 NEW YORK, NEW YORK - OCTOBER 22: Chas McCormick #20 of the Houston Astros celebrates after his two-run home run against the New York Yankees during the second inning in game three of the American League Championship Series at Yankee Stadium on Octobe

The Astros had a very eventful 6th inning offensively. Alex Bregman doubled leading off, Kyle Tucker walked, and Yuli Gurriel blooped a single down the right-field line. Lou Trivino was relieved and Trey Mancini, in his first start of the series, made it 3-0 with a sacrifice fly that advanced all three runners. Vazquez lined the next pitch into left, Trivino's second straight slider, driving in two more runs. 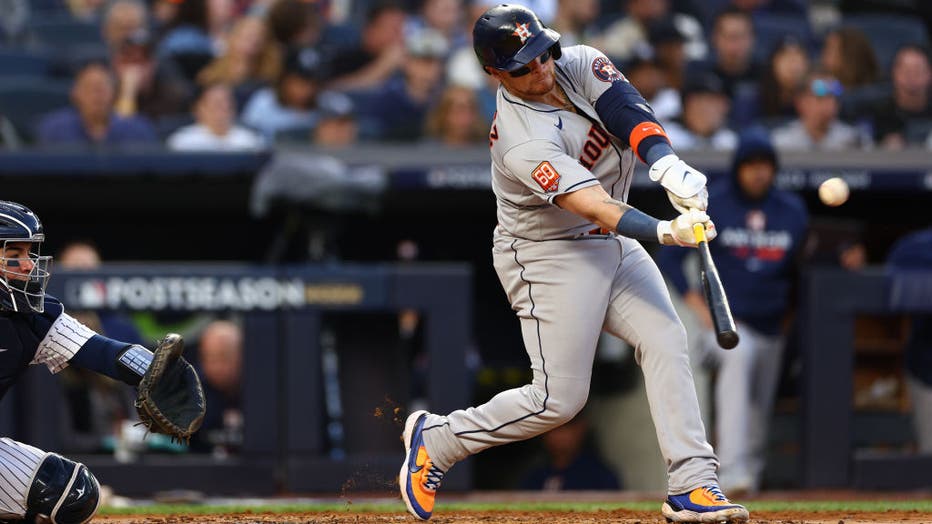 NEW YORK, NEW YORK - OCTOBER 22: Christian Vazquez #9 of the Houston Astros hits a fly ball against the New York Yankees during the second inning in game three of the American League Championship Series at Yankee Stadium on October 22, 2022 in New Yo

FINALLY
Jose Altuve hit an opposite-field double to right in the fifth for his first hit after an 0-for-25 postseason start.

McCullers takes the mound for the Astros in his first appearance since Oct. 15 against Seattle in the Division Series. His elbow was bruised by a champagne bottle during the celebration after the 18-inning win. 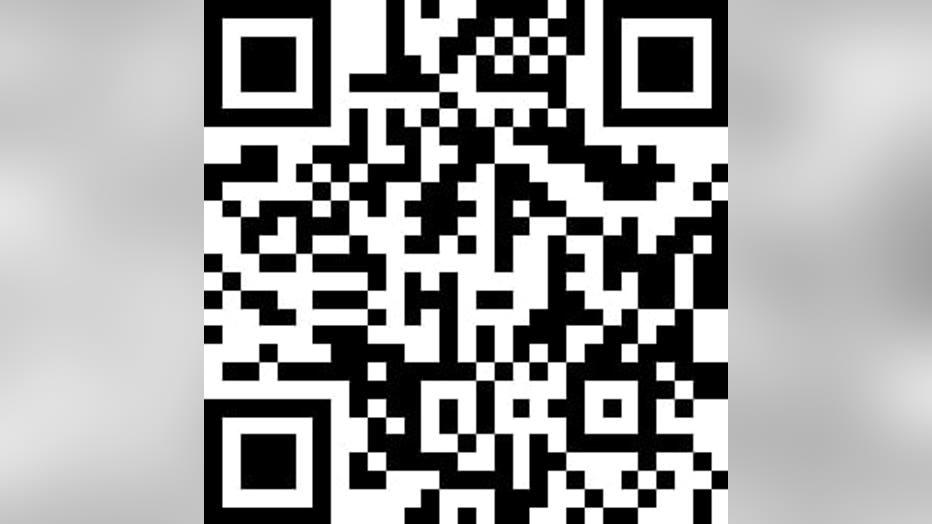 Scan the QR code above for all our Houston Astros coverage.

This article will be updated as the game goes on.