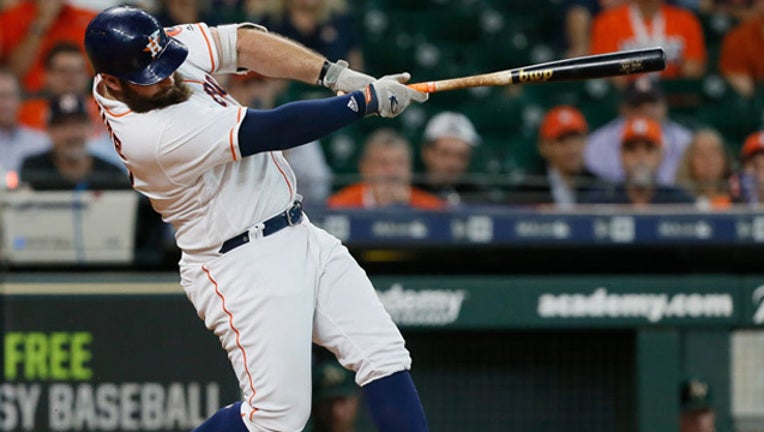 Tyler White #13 of the Houston Astros hits a walk-off home run in the ninth inning to beat the Oakland Athletics 5-4 at Minute Maid Park on August 29, 2018 in Houston, Texas. (Photo by Bob Levey/Getty Images)

HOUSTON (AP) - Tyler White homered with one out in the ninth inning to give the Houston Astros a 5-4 victory over the Oakland Athletics on Wednesday.

White, who also homered Monday, sent a pitch from Jeurys Familia (4-1) to the seats in left field. The Astros won two of three games in the series to move 2 1/2 games ahead of Oakland atop the AL West.

George Springer and Alex Bregman added two hits apiece and both drove in a run to help the Astros to their seventh win in eight games. Roberto Osuna (2-2) allowed one hit in a scoreless ninth for the win.

The Astros lost the lead in the seventh when Brad Peacock took over for starter Dallas Keuchel and struggled with location. Peacock walked Matt Chapman, Jed Lowrie and Khris Davis to load the bases before plunking Stephen Piscotty on the arm to tie it at 4.

Trevor Cahill started for the Athletics and yielded five hits and four runs - three earned - while walking a season-high six in 3 1/3 innings in the 300th appearance of his career.

Springer, Bregman and Jose Altuve hit consecutive singles with no outs in the first inning to give the Astros a 1-0 lead. Houston made it 2-0 when Bregman scored on a sacrifice fly by Carlos Correa.

Tyler White walked after that, but Yuli Gurriel grounded into a double play to allow Cahill to limit the damage.

Three straight singles capped by one from Jed Lowrie got Oakland on the board to start the third inning and cut the lead to 2-1. A one-out double by Piscotty scored two more to put the A's up 3-2.

Springer's RBI single with one out in the fourth tied it at 3-all. Cahill's day ended when he issued a bases-loaded walk to Bregman to send home another run and put Houston back on top.

He was replaced by Shawn Kelley, who retired Altuve and Correa to end the inning.

Astros: Houston placed RHP Charlie Morton on the 10-day disabled list with discomfort in his right shoulder and activated reliever Chris Devenski from the DL before Wednesday's game.

Athletics: Frankie Montas (5-3, 3.75 ERA) will be recalled from Triple- A Nashville to start for Oakland in the opener of a four-game series against Seattle on Thursday night. Montas allowed eight hits and three runs in 4 1/3 innings of a 3-2 loss to Colorado in his last major league start on July 29.

Astros: Justin Verlander (13-8, 2.72) is scheduled to start for Houston on Thursday night when the Astros open a four-game series against the Angels. Verlander, who ranks second in the AL with 229 strikeouts, has won his last two starts.