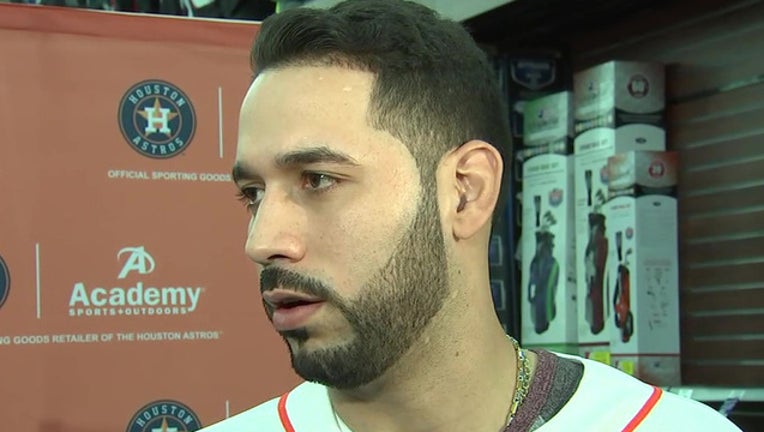 HOUSTON (AP) - Marwin Gonzalez hit yet another big homer against the Texas Rangers, and the Houston Astros are looking like the kings of the Lone Star State this season.

Gonzalez homered for the fourth time in his last three games, Carlos Correa had four hits and the Astros beat the Rangers 10-1 on Wednesday night.

Gonzalez had two hits and smashed a two-run homer off the batter's eye in center in the sixth inning for a 6-1 lead. He hit two home runs against Texas on Tuesday, including a go-ahead grand slam in the eighth that rallied Houston to an 8-7 win. He also homered against Oakland on Sunday.

Correa and Brian McCann sparked a four-run second inning with solo homers off starter Nick Martinez (0-1). Correa finished 4 for 5 and a triple shy of the cycle.

"I didn't think he was going to go a whole season without having a breakout night like this," Astros manager A.J. Hinch said of Correa, who raised his average to .255.

"What happens in baseball is we put too much emphasis on the cumulative stats, and you forget some of the quality plate appearances that come along with way. A night like tonight, we expect him to have every night, but it's the big leagues, and you can't do that."

With their fourth straight win, the Astros have the best record in baseball at 19-9, fueled by a 15-4 mark against the AL West. They matched their best 28-game start in franchise history, set by the 2006 club. Houston can sweep its four-game series with Texas by winning Thursday.

The Rangers, meanwhile, are hanging around the bottom of the division with an 11-17 record. They matched a season high with three errors and have lost five straight and eight of their last nine games on the road.

Charlie Morton (3-2) allowed a run and five hits in six innings, striking out eight and walking two. The Rangers were hitless until Rougned Odor doubled in the fourth inning.

Josh Reddick added a two-run homer off Anthony Bass in the eighth.

Every Astros hitter reached base except for Jose Altuve, who had a rare 0-for-5 night. Gonzalez, Correa, George Springer and Alex Bregman all had multihit games. Houston improved to 15-1 when scoring four runs or more.

Rangers: Cole Hamels is expected to miss eight weeks because of a strained right oblique. The Rangers put Hamels on the 10-day disabled list and recalled righty Bass from Triple-A Round Rock. Hamels was scratched from his scheduled start Tuesday. He said he felt discomfort in his right side while warming up.

Astros: RHP Collin McHugh (elbow) will travel with the team to Anaheim for this weekend's series and may start playing catch soon, Hinch said.

McCann hit his fourth homer of the season and 236th of his career as a catcher, three shy of tying Roy Campanella for 10th most at the position. It was also the 1,600th home run by an Astro since Minute Maid Park opened in 2000, regular season and playoffs included.

"Three wins against Texas - it's good to win the series. Obviously, they've beaten us pretty good over the last few years, but that's in the past. It's a good series win for us." - Astros OF George Springer

Rangers: RHP A.J. Griffin (2-0) returns from the DL after being placed there April 21 with gout in his left ankle. Griffin is 5-0 in seven starts against Houston.

Astros: RHP Joe Musgrove (1-2) will make his sixth start this season, looking to build on his last outing against Oakland when he allowed one run in 6 1/3 innings in a 2-1 loss.