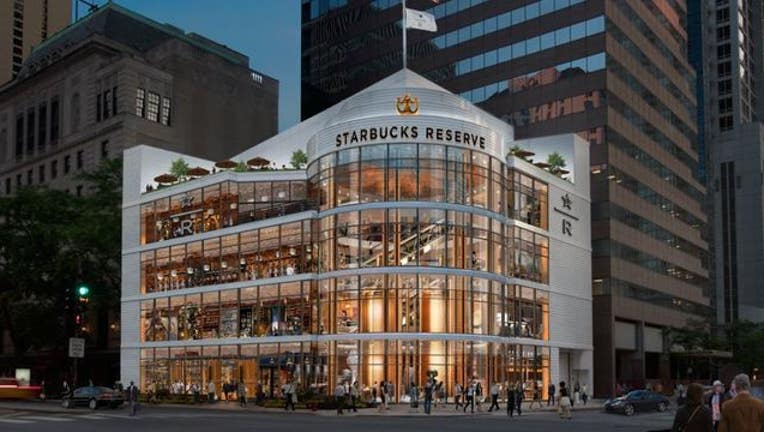 CHICAGO - Starbucks has announced that a four-story store is set to open Nov. 15 on Chicago's Magnificent Mile.

Starbucks Coffee Company is planning to open a “Starbucks Reserve Roastery” in 2019 at 646 N. Michigan Ave., the previous location of Crate & Barrel's flagship store. The store will be four-stories tall, 43,000-square-feet and will be the largest Starbucks in the world.

This will be the third Roastery location in the U.S. – Seattle opened in 2014 and a location in New York is scheduled to open in 2018. International locations including Shanghai, Milan, and Tokyo are also on track to open soon.

The Roastery will be a full sensorial coffee environment which will include roasting, multiple brewing methods, and packaging rare small-batch Starbucks Reserve coffees from around the globe.

“Chicago’s Magnificent Mile brings in millions of visitors from across this globe and is the perfect location for a world-class coffee destination,” Chicago Mayor Rahm Emanuel said. “This Starbucks Reserve Roastery will be an investment in Chicago and a strong addition to Michigan Avenue, where residents and visitors can enjoy incredible coffees from around the world in a remarkable environment.”

Chicago was the first city to open a Starbucks outside of Seattle 30 years ago.