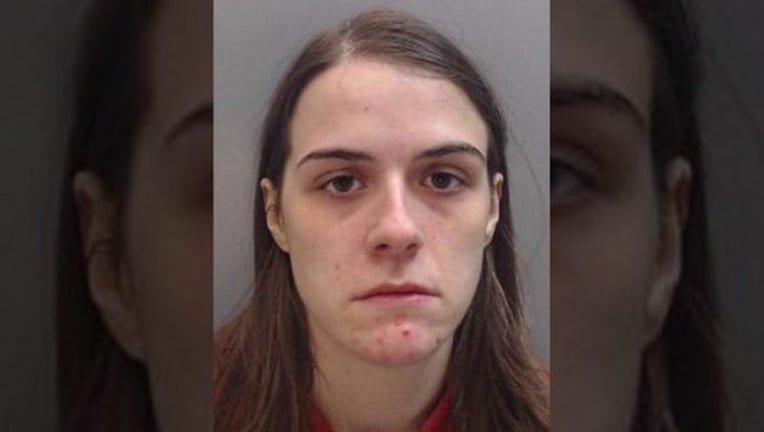 (INSIDE EDITION)- A British woman who duped her female friend into believing she was male in order to have sex with her multiple times using a blindfold and prosthetic penis has been sentenced to eight years in prison.

Gayle Newland, 25, from Cheshire, England, posed as a half-Filipino, half-Latino man named Kye Fortune and developed a relationship starting in 2011 with her unnamed victim over the Internet and the phone.

After finally deciding to meet in February 2013, the women had sex nearly a dozen times before the victim ripped off the face mask Newland convinced her to wear and saw Newland wearing a prosthetic penis.

Newland told her victim that ‘he’ had been in a car accident and had a brain tumor, the Telegraph reported.

After becoming “really good friends,” the duo decided to meet in person under one stipulation: Kye asked the woman to wear a blindfold because he was scarred and "anxious about the way he looked."

But after a sexual encounter during their last meeting, the victim said that something was “not right.”

She removed her blindfold and was surprised to find Newland instead of a man. Newland allegedly hid her true identity by wearing a wooly hat, a prosthetic penis and by binding her chest with bandages, the Chester Chronicle reported.

Newland was convicted of three counts of sexual assault this week. She became so distraught at sentencing that she had to be carried from the courtroom.

"To successfully pass off a deception of this complexity was a major undertaking involving dedicated mobile phone lines as well as regular texts from you purporting to be Kye's relatives," the judge said.

"You pursued this course of conduct over a lengthy period during which you played with her affections, acting entirely for your own sexual satisfaction and choosing to ignore the devastating impact that the eventual discovery of the truth would have on her."

For more from Inside Edition check them out online, or on FOX 29 weeknights at 6:30 p.m.