Two Central Florida men have been arrested, accused of abusing a disabled adult patient at a group home.

Less than two weeks after Universal Parks and Resorts revealed its plans to build rent-controlled apartments in Orlando – future efforts to help the housing crisis in the area -- Walt Disney World Resort on Wednesday announced its own plans to build an affordable housing community.

ORLANDO, Fla. - Less than two weeks after Universal Parks & Resorts revealed its plans to build rent-controlled apartments in Orlando – future efforts to help the housing crisis in the area -- Walt Disney World Resort on Wednesday announced its own plans to build an affordable housing community. 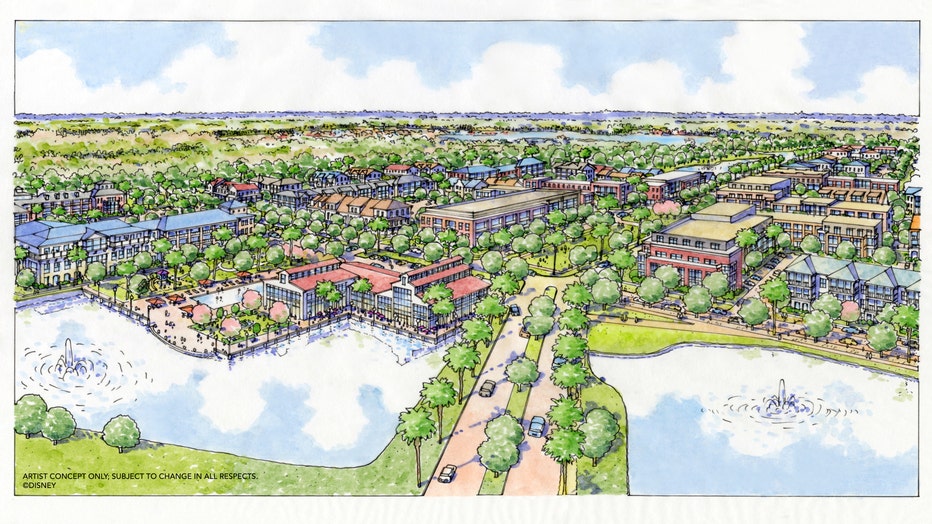 Disney said the development was still "in the early planning stages and subject to appropriate approvals," but expected to include more than 1,300 apartments on 80-acres of land in Orlando, near Flamingo Crossings Town Center, according to a news release.

"We are invested in working together with our community to solve complex issues," said Jeff Vahle, president of Walt Disney World Resort in a prepared statement.

"The lack of affordable housing is affecting many people across our country, including right here in Central Florida. With this initiative, we’re lending a hand to make a real and meaningful impact in our community by tapping into the best of our company's strengths."

Disney did not reveal a name for the development or the potential timeframe for when construction could potentially begin. Additional info would be released after a later date, the company said.

An initial artist concept rendering showed multiple buildings flanked by two ponds with water features and what appeared to be a community center with a pool.

The costs of homes and rent have soared over the last couple of years fueled by several factors, according to experts, including the pandemic, increased demand, less inventory, people relocating to states with lower cost of living, and an increase in outside investors.

How to solve the problem is up for debate.

Universal’s development, called "Catchlight Crossings," is expected to begin construction before the end of the year. It’s not expected to be fully completed in four years.

Earlier this week, the Orange County Board of Commissioners discussed the limitations of current state law for local governments to intervene in managing rent increases. They also discussed possibly drafting an ordinance and sending that to voters in November.