DAVOS, Switzerland - U.S. Treasury Secretary Steven Mnuchin says Swedish climate activist Greta Thunberg is in no position to give economic advice until she’s gone to college and come out with an economics degree.

At a press briefing at the World Economic Forum in the Swiss town of Davos, Mnuchin took a swipe at the 17-year-old environmental campaigner for her recommendation that both the public and private sectors should divest from fossil fuels.

When asked how that would affect the U.S. economic model, Mnuchin took a swipe at Thunberg. 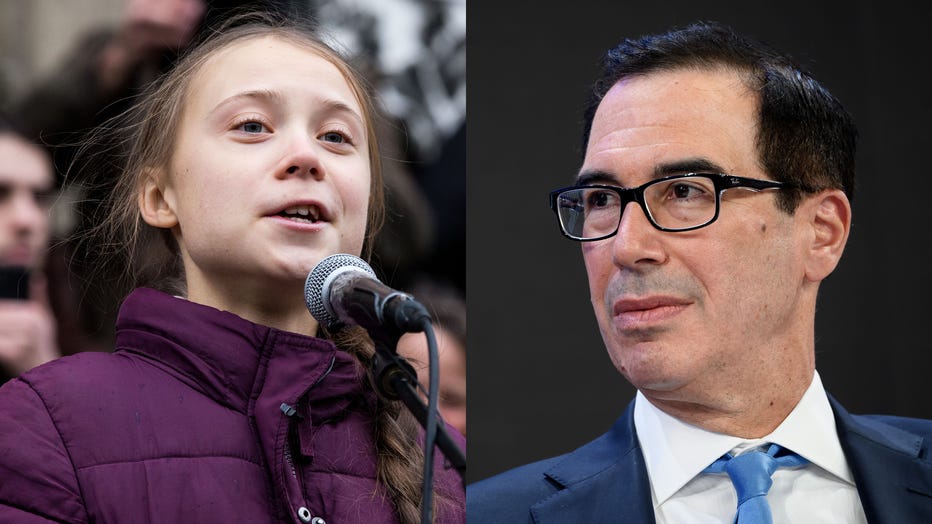 Swedish climate activist Greta Thunberg speaks to participants at a climate change protest on Jan. 17, 2020 in Lausanne, Switzerland, alongside U.S. Treasury Secretary Steven Mnuchin attending a session at the Congress center during the World Economi

“Is she the chief economist? Who is she? I’m confused,” he said. Then following a brief pause, he said it was "a joke.”

"After she goes and studies economics in college, she can come back and explain that to us,” he concluded.

Over the past year, Thunberg has taken issue with many aspects of U.S. policy, not least President Donald Trump’s decision to pull the country out of the Paris accord to limit global warming.

Mnuchin insisted that U.S. policy has been misinterpreted, and that Trump “absolutely believes” in a clean environment.

The U.S., Mnuchin said, has been a leader in reducing carbon emissions. “What the president objects to is the Paris agreement, because he thought it was an unfair agreement for the United States."

RELATED: Greta Thunberg scolds leaders at Davos forum: 'Pretty much nothing has been done' on climate change