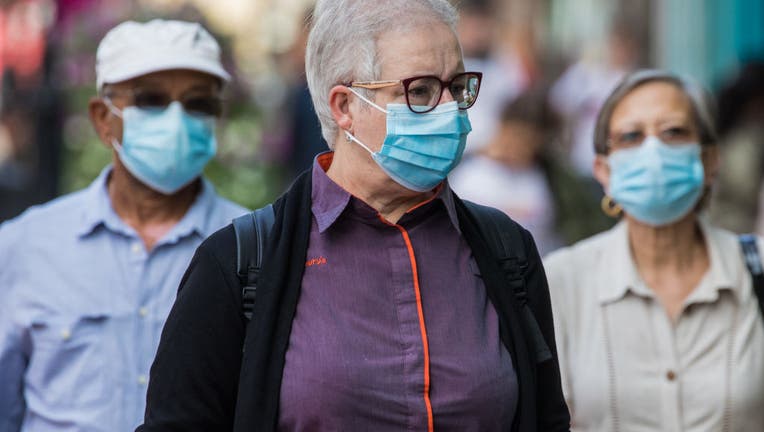 Shoppers wear face coverings to help prevent the spread of the coronavirus on 20 September 2020 in Staines-Upon-Thames, United Kingdom. The Borough of Spelthorne, of which Staines-upon-Thames forms part along with Ashford, Sunbury-upon-Thames, Stanwe

NEW YORK - Britain’s top medical adviser says the country has, in a “very bad sense,” turned a corner on COVID-19 infection rates, with figures suggesting there will be exponential growth and deaths will likely rise unless action is taken.

Chief Medical Officer Chris Whitty told the public on Monday that rates are going in the “wrong direction” amid expectations the government is preparing to announce new measures to control the pandemic.

“We have in a very bad sense, literally turned a corner," after weeks of increasing infection rates.

Whitty said that if nothing is done, new infections will rise to 49,000 a day by mid-October. Hospitalizations are also doubling in seven to eight days — leading to more deaths.

There was also no indication that the virus had lessened in severity, he said. “We see no evidence that this is true."

Prime Minister Boris Johnson huddled with ministers over the weekend to discuss how the government will respond to the recent rise in cases, which has pushed infection rates to levels last seen in May. Later this week the government is expected to announce a slate of short-term restrictions that will act as a “circuit breaker” to slow the spread of the disease.

The government is hoping to keep that number from climbing back to the peak levels of early April, when more than 5,000 cases a day were being reported.

While death rates have remained relatively low so far, public health officials warn that deaths are likely to rise in coming weeks.

The government last week imposed tighter restrictions on communities in northeastern England, where the infection rate first began to rise. Bars and restaurants in those areas must now close between 10 p.m. and 5 a.m. and people are prohibited from socializing with individuals from other households.

The rise in infection rates comes as lawmakers across the political spectrum criticize the government’s testing program. While government ministers tout the record numbers of tests being performed, there are widespread reports of people having to travel hundreds of miles for tests and tests being voided because it is taking labs too long to process them.

An effective testing program is seen as essential to controlling the pandemic because it allows the government to track infections and inform people when they should self-isolate.