The new guidelines say vaccinated travelers are less likely to get and spread the virus, but the CDC still recommends safety measures like wearing a mask, social distancing and hand washing.

WASHINGTON - The Transportation Security Administration said it screened more than 10.1 million people in the United States over the Fourth of July weekend, according to an agency news release.

The soaring numbers were recorded between July 1 and July 5 and the 10.1 million "represents 83% of travel volume for the same 5-day holiday period in 2019," according to the TSA.

July 1 was the busiest travel day of the holiday weekend, with 2,147,090 travelers screened.

"Also on July 1, TSA screened almost 458,000 TSA PreCheck travelers, the highest number of TSA PreCheck screenings in one day since the beginning of the pandemic," the TSA said. 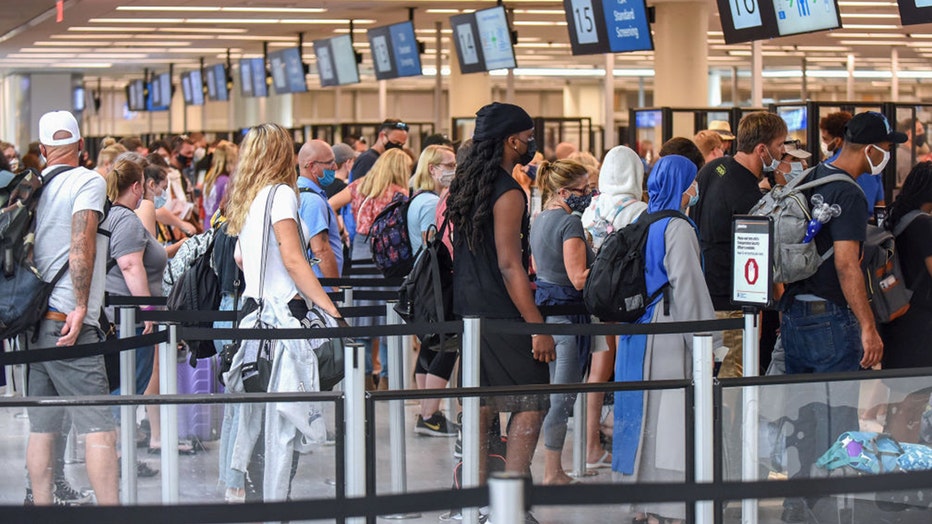 RELATED: Crowded flights and air travel delays could continue through the summer

Over the course of July Fourth weekend, 99.7% of travelers averaged less than 30 minutes while waiting to be screened at airports and 99% of TSA PreCheck passengers waited less than five minutes, the TSA continued.

"This holiday weekend, TSA saw over 10 million passengers travel safely through security checkpoints. With some airports already exceeding 2019 travel volumes and many not far behind, we expect the summer to remain busy for travel," said TSA Administrator David Pekoske. "However, there were 70 firearms intercepted this weekend. We continue to remind passengers to pack mindfully and help us avoid the dangers, delays and consequences that accompany a gun or weapon detected at a security checkpoint."

Meanwhile, American Airlines said it carried nearly three times as many passengers over the July 4 weekend than it did over the holiday last year, the latest sign that travel — at least within the U.S. — is continuing to rebound from pandemic lows of 2020.

American said Wednesday that it carried nearly 2.7 million passengers on more than 26,000 American and American Eagle flights between last Thursday and Monday.

Willie Walsh, head of the International Air Transport Association, said the rules are confusing and discourage people from travel, which his group insists can be done safely. He said COVID-19 tests required by many countries are too expensive, further discouraging travel.

The group said that air travel worldwide was down 63% in May compared with the same month in 2019. The group said domestic travel in China and Russia is higher than it was before the pandemic, but that a travel recovery in Japan and India has been thrown into reverse by the rise of new and more contagious variants of the virus.