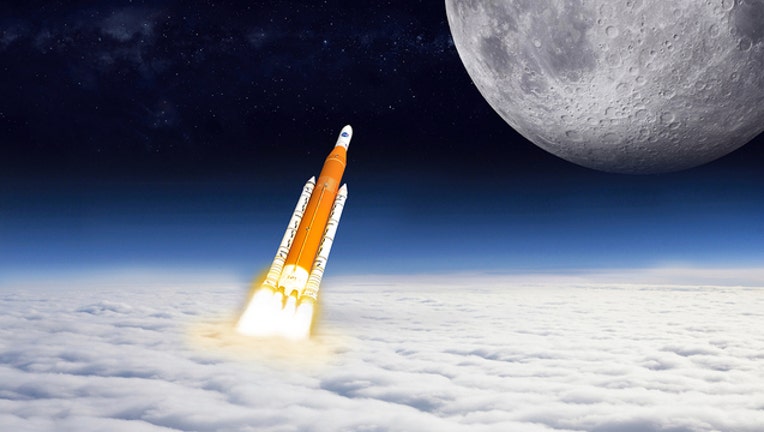 WASHINGTON (AP - The Trump administration wants to shift money for Pell Grants for college education to fund new spending, including a $1.6 billion bump for NASA to return American astronauts to the moon by 2024.

Under a budget amendment sent to Congress Monday evening, the administration would use an additional $1.9 billion in surplus Pell Grant money to fund other budget priorities, including an infusion of new cash for NASA "so that we can return to Space in a BIG WAY!" President Donald Trump tweeted.

A series of proposed changes reverses some of the most controversial cuts Trump's administration had proposed, including slashing funding for the Special Olympics. The White House can send such requests, called "rescissions," to Congress to clawback unspent money the administration views as wasteful or unnecessary. Congress, however, must approve.

Officials insisted the re-allocation of the Pell Grant money would have no impact on those currently receiving grants, which help low-income students pay for college.

"This does not cut any spending for Pell Grant programs as the budget continues to ensure all students will get their full Pell Grant and keeps the program on sound fiscal footing," Office of Management and Budget spokesman Wesley Denton said in a statement.

Enrollment in the program has declined since 2011, leading to a surplus of nearly $9 billion, according to the budget office. The administration had originally proposed using $2 billion of that surplus to fund other spending. The new request brings that total to $3.9 billion, which OMB described as similar to its request in the 2018 budget. The administration proposed a similar cancellation of unobligated Pell grant money for 2019, but later backed off the idea.

The decision to bolster NASA's budget had been announced earlier Monday in a series of tweets in which Trump promised a new era of space exploration.

"Under my Administration, we are restoring @NASA to greatness and we are going back to the Moon, then Mars," he wrote.

Vice President Mike Pence has called for landing astronauts on the moon within five years, and has said NASA needs to achieve that goal "by any means necessary." This summer marks the 50th anniversary of the first manned moon landing.

The request for the NASA funding comes as the White House has been signaling its reluctance to endorse a deal to increase spending "caps" for domestic programs backed by both parties on Capitol Hill. In negotiations on a long-sought hurricane and flood disaster aid bill have gone frustratingly slowly, in large part because Trump has been opposed to giving Puerto Rico more rebuilding funds to help the island recover from back-to-back 2017 hurricanes.

Trump had previously announced plans included in Monday's request to reverse several of his administration's own proposed budget cuts, including efforts to gut federal funding for a wide-ranging Great Lakes cleanup program.

Trump told a rally crowd in Grand Rapids, Michigan, in March that he was reversing course on the proposed cuts and would support allocating $300 million this year for the Great Lakes Restoration Initiative after three Republican lawmakers from the state lobbied him during a ride from the Grand Rapids airport.

Trump's initial budget proposal had sought to cut the program's federal financing by 90%.

Trump also announced that day that he would be reversing his budget's call to slash $17.6 million in funding for the Special Olympics in the face of withering criticism from Capitol Hill.

Trump tweeted Monday that he had "officially updated my budget to include $18 million for our GREAT @SpecialOlympics, whose athletes inspire us and make our Nation so PROUD!"

And Trump said he would push for $200 million for Army Corps of Engineers restoration work in the Florida Everglades this year, calling on Congress "to help us complete the world's largest intergovernmental watershed restoration project ASAP!"

In a letter to House Speaker Nancy Pelosi formally requesting the changes, Trump said they were "necessary" to correctly reflect his administration's priorities and would not require any new discretionary spending beyond his earlier request.