The proceedings had an air of uncertainty as lawmakers faced a crucial vote on whether to call witnesses — a decision that could lead to an abrupt end of the trial or bring days or weeks of testimony from former national security adviser John Bolton and other witnesses.

WASHINGTON - As senators wrapped up their questions in President Donald Trump's impeachment trial, one of Trump's attorneys tried to explain his controversial defense. Meanwhile, a Republican senator was dramatically thwarted in his questioning by Chief Justice John Roberts.

Throughout, senators heard urgent pleas either to stop a president who Democrats say tried to cheat in the 2020 election or shut down impeachment proceedings that Republicans insist were a purely partisan attack.

The proceedings had an air of uncertainty as lawmakers faced a crucial vote on whether to call witnesses — a decision that could lead to an abrupt end of the trial or bring days or weeks of testimony from former national security adviser John Bolton and other witnesses.

Highlights of Thursday's session and what's ahead as senators conduct just the third impeachment trial of a president.

Alan Dershowitz, one of Trump's lawyers and a renowned Harvard professor, delivered a stunning defense of Trump Wednesday night that essentially would make it impossible to impeach a president for anything he might do to boost his reelection prospects. The argument was quickly and forcefully denounced by legal scholars, historians and editorial boards who said there are clear limits on presidential authority.

Dershowitz seemed to backtrack Thursday, saying his remarks have been misinterpreted. But Democrats seized on them as they pressed their case for Trump's removal from office for tying the release of military aid to Ukraine to an investigation of his political rivals.

“I never said a president could do anything to get re-elected,'' Dershowitz said on Twitter. "A president seeking re-election cannot do anything he wants. He is not above the law.''

But Democrats said that is exactly what Dershowitz claimed on Wednesday: "If a president does something which he believes will help him get elected, in the public interest, that cannot be the kind of quid pro quo that results in impeachment,” he said on the Senate floor.

Rep. Adam Schiff, the lead Democratic prosecutor called Dershowitz's argument “a descent into constitutional madness," adding that if followed, it ”would lead this country down the most destructive path."

Democrats were so confident that Dershowitz had blundered they replayed his remarks several times Thursday as they made their case. 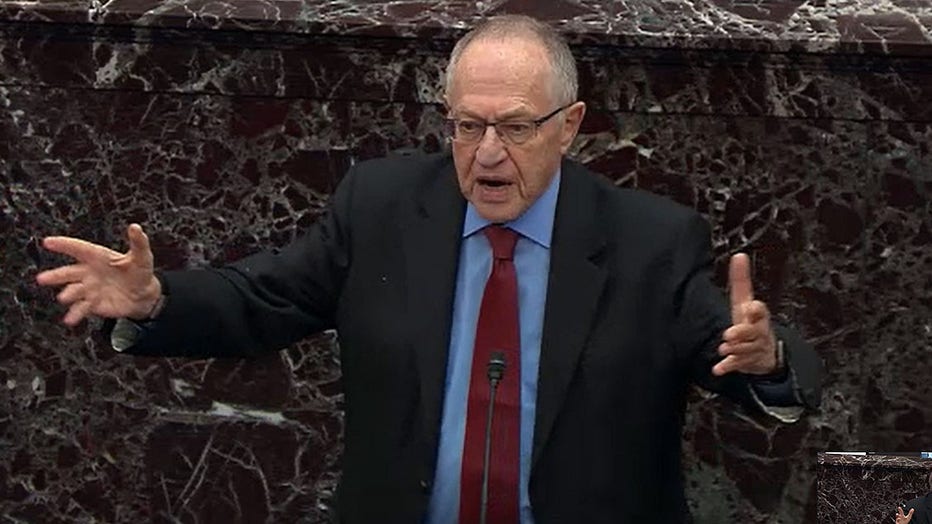 In this screenshot taken from a Senate Television webcast, legal counsel for President Donald Trump, Alan Dershowitz, answers a question from a senator during impeachment proceedings in the Senate chamber at the U.S. Capitol on Jan. 29, 2020 in Washi

Republican Sen. Rand Paul of Kentucky roiled the trial briefly Thursday as he tried to ask about the intelligence community whistleblower whose complaint led to the investigation that resulted in impeachment. Paul has said he believes the whistleblower may have conspired with House staff aides in writing the August complaint.

Roberts, who has told senators the whistleblower's identity should be protected, refused to read the question aloud. He did not say what was on the card.

Paul left the impeachment proceeding to hold a news conference where he claimed his question was not aimed at outing the whistleblower.

U.S. law protects the identity and careers of people who bring forward accusations of wrongdoing by government officials. Lawmakers in both parties have historically backed those protections.

The lawmakers wanted to be assured by the president that private citizens would not conduct foreign policy unless they've been specifically designated by the State Department to do so. The question referred to Trump's personal attorney, Rudy Giuliani, who played a key role in the Ukraine investigation.

White House lawyer Patrick Philbin said Giuliani was merely a "source of information" for Trump on Ukraine and was not conducting foreign policy. Even George Washington relied on trusted confidants, Philbin noted.

Schiff called the answer "breathtaking,'' saying the White House was admitting that Giuliani was not conducting official business when he was in Ukraine or working on Ukraine issues.

“They have just undermined their entire argument,'' Schiff said, adding that the White House had "acknowledged that the person in charge of this was not conducting policy'' but instead "was undergoing this domestic errand.”

The last comment referred to a remark by former Trump adviser Fiona Hill, who testified that Giuliani and his associates were on “a domestic political errand” while she and other professionals were engaged in foreign policy.

Rep. Zoe Lofgren of California, a congressional staffer during Watergate and now a House prosecutor, said Watergate also started as a partisan inquiry. A bipartisan consensus emerged only after Republicans — including staunch Nixon supporters — saw enough evidence to change their minds, she said.

“They couldn't turn away from the evidence that their president had committed abuse of power and they had to vote to impeach him,'' Lofgren said. While disappointed that House Republicans did not vote to impeach Trump, the Senate — "the greatest deliberative body on the planet'' — has a new opportunity, she said.

Unlike House investigators, the Senate can call first-hand witnesses like Bolton who can testify about what they heard Trump say and saw him do, Lofgren said. "I think we would all learn something. Let's see if that kind of information can help the senators come together as happened in the House Judiciary Committee so many years ago.''

Next steps for the trial were unclear late Thursday. A vote on witnesses, expected Friday, could lead to an abrupt end of the trial with an expected acquittal by Republican senators unconvinced of wrongdoing by Trump. A less likely, but still possible outcome was a deal that could bring testimony from Bolton and other witnesses.

Three Republican senators have indicated openness to calling witnesses, an outcome that could lead to a 50-50 tie on the question if no senator changes their vote. It was not clear if Roberts would attempt to break a tie.