The announcement comes as part of an emergency action to help Americans deal with the new coronavirus.

WASHINGTON - President Donald Trump stated on Friday that he is declaring a national emergency over the coronavirus outbreak.

President Trump spoke about the "old and obsolete rules" and announced $50 billion for states, territories and localities in the shared fight against disease.

The president also spoke about broad new authority to the U.S. Secretary of Health and Human Services waive exisiting healthcare rules in response to the virus.

"No resource will be spared, nothing whatsoever," the president said, and that half a million additional testing kits would be available early next week. Locations would be announced Sunday night. In the press conference, it was announced that interest on federal student loan payments would be waived during the emergency.

In the press conference, White House Coronavirus Response Coordinator Dr. Deborah Birx spoke about new coronavirus testing approach for consumers. This includes a screening website facilitated by Google where visitors can fill out a screening questionnaire. From there, if they have have symptoms or risk factors, visitors to the website would then be told where the drive-thru option would be available for them to receive a test. Results would then be available within 24-36 hours.

However, according to the Verge, the Google site Trump described is actually from a company called Verily that falls under the banner of Alphabet, Google's parent company. That tool is still in development with initial tests planned for the Bay Area.

The president did not provide an affirmative response when asked by a reporter if all Americans by Sunday night would be able to receive a test. The president also noted that additional countries may be added and taken off the current travel ban list.

The president noted that he did not discuss a border closure between the U.S. and Canada with Prime Minister Justin Trudeau. The prime minister's wife was diagnosed with the novel coronavirus.

When asked by a reporter regarding the disbandment of the White House pandemic office and how valuable time was lost as a result, the president declined responsibility.

The president noted that he was not exposed to the virus from someone that he recently took a photo with who had been diagnosed. When questioned again on the topic on if he was being selfish by not being tested, the president said he was most likely going to be tested but did not confirm if he would share the results.

The White House is under enormous pressure, dealing with the crisis on multiple fronts as it encroached ever closer on the president.

The virus has swept in alarming ways across American life, sending the financial markets into a dangerous slide and shuttering schools and sporting events and limiting everyday interactions in communities across the country. 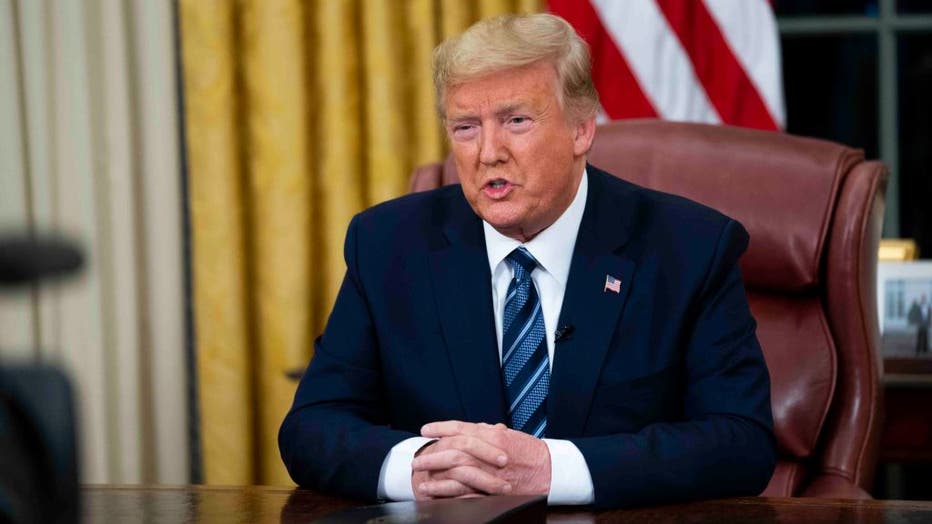 President Donald Trump addresses the nation from the Oval Office about the widening Coronavirus crisis on March 11, 2020 in Washington, DC. (Photo by Doug Mills-Pool/Getty Images)

The administration's federal task force managing the crisis was working furiously to break a bottleneck in the nation's ability to test for the new virus, and weighing what sort of emergency powers Trump would need to invoke to provide needed aid to overwhelmed state and local governments.

And a personal health scare intensified as White House officials worked to determine the level of exposure by the president and senior aides to several foreign officials who have since tested positive for the virus.

In one welcome announcement, the administration said Friday it was awarding $1.3 million to two companies trying to develop rapid COVID-19 tests that could detect within an hour whether a person is positive for the new coronavirus.

For most people, the new coronavirus causes only mild or moderate symptoms, such as fever and cough. For some, especially older adults and people with existing health problems, it can cause more severe illness, including pneumonia.

The vast majority of people recover. According to the World Health Organization, people with mild illness recover in about two weeks, while those with more severe illness may take three to six weeks to be over it.

Earlier Friday, Mnuchin sounded an optimistic note. “I think we're very close to getting this done,” he said in an appearance on CNBC.

On the COVID-19 illness, Mnuchin cautioned that “people should understand the numbers are going to go up before they go down.”

Pelosi and Mnuchin continued their constant cross-town phone calls throughout a tense morning of negotiations to firm up and salvage the emerging deal that has widespread support from Democrats and some in the business community seeking certainty.

Providing sick pay for workers is a crucial element of federal efforts to stop the rapid spread of the infection. Officials warn that the nation's healthcare system could quickly become overwhelmed with gravely sick patients, as suddenly happened in Italy, one of the countries hardest hit by the virus.

The ability to ensure paychecks will keep flowing — for people who stay home as a preventative measure or because they're feeling ill or caring for others — can help assure Americans they will not fall into financial hardship.

“We're in an emergency, and we're trying to respond as fast as we can," said House Appropriations Committee Chairwoman Nita Lowey, D-N.Y., as lawmakers filed in and out of Pelosi's office on Friday.

The potential deal between Congress and the White House would cap a tumultuous week in which Washington strained for a comprehensive response to an outbreak that is testing the nation's political, financial and health care systems.

Trump has struggled to show he's on top of the crisis, after giving conflicting descriptions of what the U.S. is doing to combat the virus.

Pelosi promised a third coronavirus package will follow soon, though the House is leaving Washington on Friday for a previously scheduled recess. That measure will include more aggressive steps to boost the U.S. economy, which economists fear has already slipped into recession.

But there's little appetite within either party for Trump's proposal to suspend collection of the 6.2% Social Security payroll tax. States are already clamoring for fiscal relief from Washington as the virus threatens their budgets.

The coronavirus crisis also got personal for Trump and some members of Congress.

The president, his daughter Ivanka, Attorney General WIlliam Barr and lawmakers are among those who have been in contact with others who have now tested positive for the coronavirus.

Australian Home Affairs Minister Peter Dutton, now in isolation at a hospital after testing positive for the coronavirus, had returned to Sydney from Washington, where he met Barr and Ivanka Trump last week.

White House officials have not responded to questions about whether the administration officials intend to be tested or self-quarantine.

Barr, meanwhile, was staying home Friday, though he “felt great and wasn't showing any symptoms,” according to his spokeswoman Kerri Kupec. She said the CDC did not recommend testing at this point.

In addition, just days after meeting Trump and Sen. Rick Scott, R-Fla., at the president's Mar-a-Lago resort, the communications chief for Brazil's president, Fábio Wajngarten, tested positive for coronavirus. Scott said he was isolating himself. Trump, 73, said he was not concerned.

GOP Sen. Lindsey Graham, who was also at Trump’s club on the weekend, joined a growing list of lawmakers who have chosen to isolate themselves as a precaution. He announced Friday that he also met with the Australian official who has now tested positive. And GOP Sen. Ted Cruz of Texas, who had previously isolated himself after a potential exposure at a conservative conference in Washington, said Friday he met with a Spanish official and is now self-quarantining.

Lawmakers from both parties expressed alarm at the U.S. response, and especially over how few patients have been tested.

Dr. Anthony Fauci, infectious disease chief at the National Institutes of Health, in several television interviews Friday, said more tests would be available over the next week, but that officials should not wait before trying to mitigate the virus' effects.

“We will have considerably more testing in the future, but you don't wait for testing,” Fauci said on ”CBS This Morning." He said school closings and similar measures are "generally an appropriate approach.”

“We're at a critical point now as we seek to blunt the rise in cases to make sure it's a hill, not a mountain,” Fauci said on ABC's “Good Morning America."