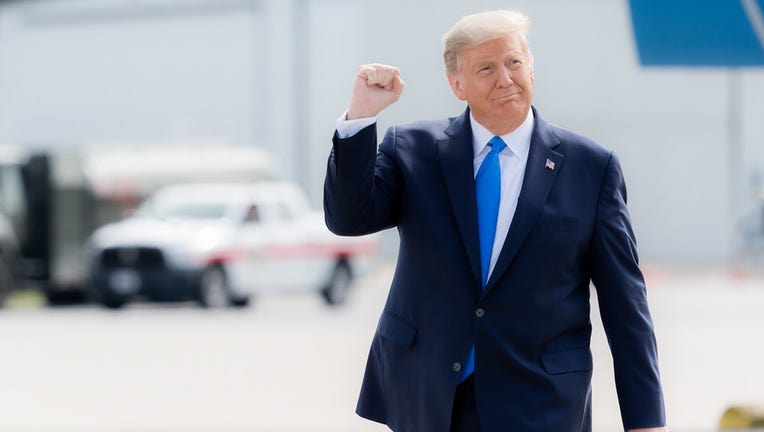 ATLANTA - Former President Donald Trump claims in a new statement the recent purge of Georgia voting rolls is ‘proof’ that he won the state's 2020 presidential election.

Friday, Republican Secretary of State Brad Raffensperger announced the list of nearly 102,000 voters who will be removed from the rolls unless they act to preserve their registration.

In a statement Tuesday, Trump questioned why the voters weren't removed before last year's election. Under Georgia's election law, the state purges any of the 7.8 million voters who may have died or moved away every other year.

"They had us losing by a very small number of votes, many times less than the 101,789 figure," Trump said. "This means we (you!) won the Presidential Election in Georgia."

The former president also claimed that "other information will soon be revealed about Georgia—and other States as well" before repeating his assertion that the presidential election was "rigged" against him.

In 2019, Georgia purged 287,000 voters, while nearly 5,000 either voted or got in touch to keep their registration from being canceled. This year, the list includes around 67,000 voters who submitted a change of address form to the U.S. Postal Service and about 34,000 voters who had election mail returned.

The secretary of state's office also removes voters who were convicted of felonies or who died on a monthly basis. In May, officials say more than 18,000 were removed last month after Georgia concluded they had died based on information from Georgia’s own death registry or from the Electronic Registration Information Center. Officials reported that had no record that any of those 18,000-plus cast ballots in the November 2020 general election or the January runoff.

In the current purge, election officials said cancellation notices would be mailed and those who respond within 40 days will have their registration switched back to active. Anyone who is removed could register again.

"Making sure Georgia’s voter rolls are up to date is key to ensuring the integrity of our elections," Raffensperger said in a statement Friday. "That is why I fought and beat Stacey Abrams in court in 2019 to remove nearly 300,000 obsolete voter files before the November election, and will do so again this year. Bottom line, there is no legitimate reason to keep ineligible voters on the rolls."

Voter purges in Georgia became a hot-button issue during the 2018 governor’s race between Democrat Stacey Abrams and Republican Brian Kemp. Secretary of State before being elected governor, Kemp oversaw aggressive voter purges during his tenure. More than 1.4 million voter registrations were canceled in Georgia between 2012 and 2018.

Multiple recounts confirmed Biden’s November margin of about 12,000 votes out of 5 million cast, making him the first Democratic presidential nominee to win Georgia since 1992. In the January Senate runoffs, Democrats’ margins widened. Ossoff defeated Perdue by 55,000 votes, while Warnock deposed Loeffler by more than 93,000 votes or about 2 percentage points. Both margins were beyond the thresholds that trigger recounts.