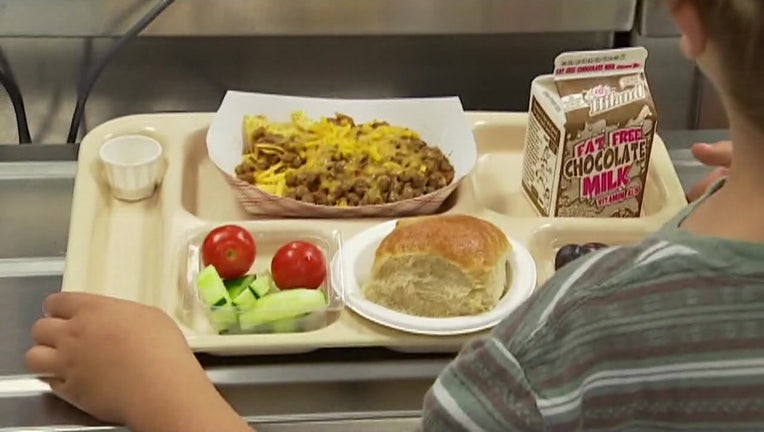 WASHINGTON - The Trump administration on Friday took another step toward dismantling Michelle Obama's school nutrition guidelines, proposing a new rule that could lead to more pizza and fries and less fruit and a smaller variety of vegetables on school menus.

Agriculture Secretary Sonny Perdue, who announced the rule changes on Obama’s birthday, said they were needed to give schools more flexibility and reduce waste while still providing nutritious and appetizing meals.

“What a shameless, embarrassing capitulation to lobbyists at the expense of American children and their well-being,” said Sam Kass, who served as executive director of Obama's “Let's Move" campaign to combat child obesity. ”This country - and its kids - deserve so much better. "

Under the proposal, schools would be allowed to cut the amount of certain types of vegetables served at lunch, and legumes offered as a meat alternative also could be counted as part of the vegetable requirement. Potatoes could be served as a vegetable.

The proposal also would allow schools to reduce the amount of fruit at on-the-go breakfast served outside the cafeteria.

Gay Anderson, president of the School Nutrition Association, said that while the nutrition standards had been a success overall, some requirements led to reduced participation in the program, higher costs and waste.

“USDA’s school meal flexibilities are helping us manage these challenges and prepare nutritious meals that appeal to diverse student tastes,” Anderson said in a statement.

The school meals program serves about 30 million students, most of them from low-income families.

“The Trump administration’s assault on children’s health continues today under the guise of ‘simplifying’ school meals,” Colin Schwartz, the Center for Science in the Public Interest’s deputy director for legislative affairs, said in a statement.

The proposal would give schools greater flexibility in offering entrees for a la carte purchases, which Schwartz said would “create a huge loophole in school nutrition guidelines, paving the way for children to choose pizza, burgers, French fries, and other foods high in calories, saturated fat or sodium in place of balanced school meals every day.”

Geraldine Henchy, director of nutrition policy at the Food Research & Action Center, said the bottom line should be nutrition, but the revisions to the a la carte rule would result in students getting “a lot more fats, a lot more sodium, a lot more calories.”

Specifically, the proposal would reduce the amount of red and orange vegetables that would have to be offered every day at lunch.

For breakfasts taken to go, fruit servings could be reduced from a cup to half a cup.

Rep. Bobby Scott, a Virginia Democrat and chairman of the House Committee on Education and Labor, said the proposal “threatens the progress we’ve made toward improving nutrition in schools.”

“For many children, the food they eat at school is their only access to healthy, nutritious meals,” he said.

The American Heart Association said the rule would “put children’s health at risk.”

“With one in three of our kids on track to have diabetes, it's unconscionable that the Trump administration would do the bidding of the potato and junk food industries," Kass said.

The proposed rule is the second move by the Trump administration to scale back the school lunch program’s nutrition standards. Under a 2018 rule, the administration reduced the whole grains that had to be served and allowed low-fat chocolate milk. Before the rule change, only fat-free flavored milk was permitted.

“Schools and school districts continue to tell us that there is still too much food waste and that more common-sense flexibility is needed to provide students nutritious and appetizing meals,” he said.

Nearly a million students could lose their automatic eligibility for free school lunches under a Trump administration proposal that's expected to reduce the number of people who get food stamps.