A spectator who caused a crash during Stage 1 of the Tour de France on June 26 could face a lawsuit.

"We are suing this woman who behaved so badly. We are doing this so that the tiny minority of people who do this do not spoil the show for everyone," Tour de France Deputy Director Pierre-Yves Thouault said, according to the BBC.

The spectator was allegedly seen holding up a large sign during the tour and was standing in the roadway where cyclists were traveling. German rider, Tony Martin, accidentally brushed against the unknown woman’s sign, causing him to lose balance and fall, creating a snowball effect behind him.

Martin said he and his teammates had everything under control until the crash occurred. 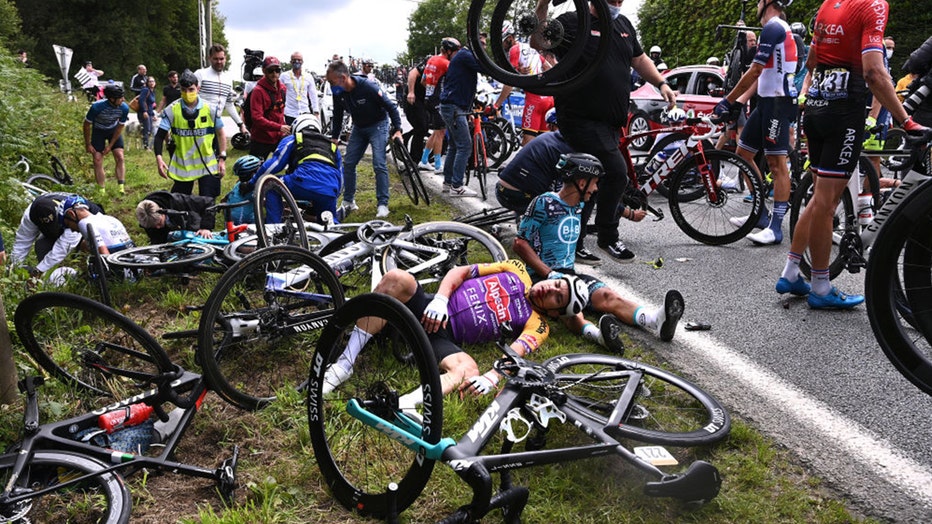 "It all happened very quickly; suddenly almost the entire team was on the ground," Martin said in a statement. "Many spectators behave respectfully, but unfortunately not this one. Fortunately, Primoz came through it well. I hope the physical damage to myself and the other guys is manageable."

Local French police said the woman fled the scene following the crash and a "judicial investigation" has been opened for "Involuntary Injuries with Disabilities not exceeding 3 months by manifestly deliberate breach of an obligation of safety or caution," according to a Gendarmerie du Finistère Facebook post.

The crash caused Jasha Sütterlin to exit the tour after suffering a contusion on his right wrist, according to DSM statement. Sütterlin is part of DSM, a worldwide cycling team.

"I am so disappointed; I have no words for it really. I can’t really move my right wrist so it was impossible for me to carry on today. It’s good that nothing is broken, but I can’t say more than I’m really disappointed to go home. I wish the rest of the guys the best of luck for the Tour," the statement read.