TEXAS - Texans are more worried about crime and safety than almost any other state in the U.S.

According to the annual State of Safety in America survey published on Safewise.com, Texas is the 4th most-worried state in the U.S. about crime and safety. 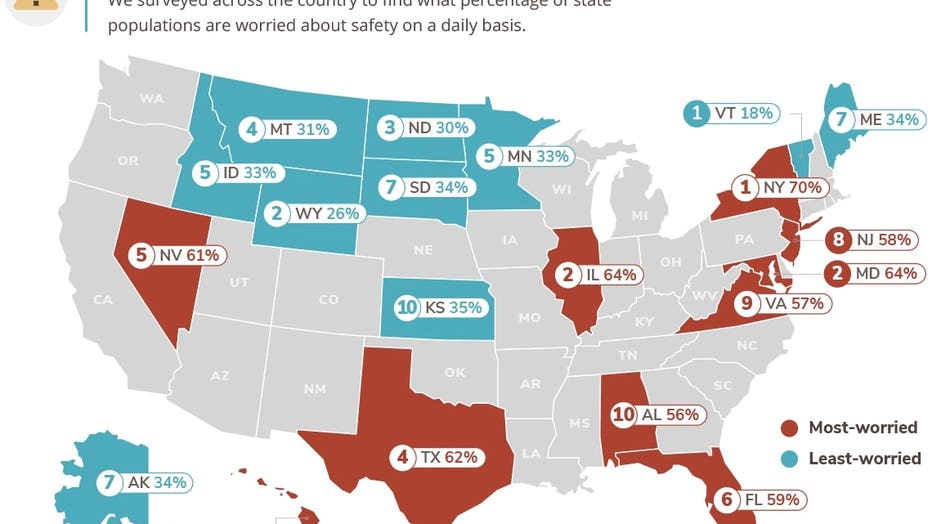 Texas joins New York, Illinois, Maryland, and Nevada in the top 5 states with the highest percentage of population worried about safety on a daily basis.

The 2021 survey, released on June 16, indicated that 60% of Texas residents believe that crime is on the rise, and that 62% are concerned about their safety daily, which is 15% above the national average.

Of the total respondents in Texas, 61% reported day-to-day concern about gun violence, in comparison to a 53% national average.

In a press conference with Mayor Sylvester Turner, HPD Chief Troy Finner, and Crime Stoppers, the family of 62-year-old Elsa Mikeska gathered to beg the public for information about who gunned down their mother last week. We talk to Crime Stoppers about what is happening in our city.

"We’ve adapted the survey each year to respond to current events and areas of growing concern," said Rebecca Edwards, Safety and Security expert for Safewise.com. "This year, we also added questions about package theft, police violence, and the COVID-19 pandemic."

According to the report, 47% of Texas residents were worried about police violence, as opposed to 60% responding that they had confidence in law enforcement.

Houston and Harris County have been operating virtually for more than a year, but is it time to get things back to normal? Recently Houston Police Chief Troy Finner blamed the local court system for the area's recent spike in violent crime, saying they're backed up and letting violent offenders out on bonds when they shouldn't be. The News Edge legal expert Charles Adams addressed the accusation and gave his opinion on the effects of a virtual legal system.

The report specified that Americans believe property crime is the most likely crime to happen to them. The survey showed that 65% of participants in Texas reported the use of some form of property protection, which mostly consisted of guard animals such as dogs.

For more findings, refer to the State of Safety in America 2021 survey report.