Tear gas is deployed as protesters gather on Key Bridges in Central Baghdad.

BAGHDAD - Thousands of people took to Iraq’s streets on Sunday to mark one year since mass anti-government demonstrations swept the country, with police firing tear gas in central Baghdad to stop protesters from crossing strategic bridges and both sides reporting injuries.

Protesters marched in the capital and several southern cities — including Najaf, Nasiriyah and Basra — to renew demands for an end to corruption by Iraq's political establishment.

When dozens of protesters attempted to scale cement barriers on Jumhuriya and Sinak bridges, security forces fired tear gas to disperse the crowds. 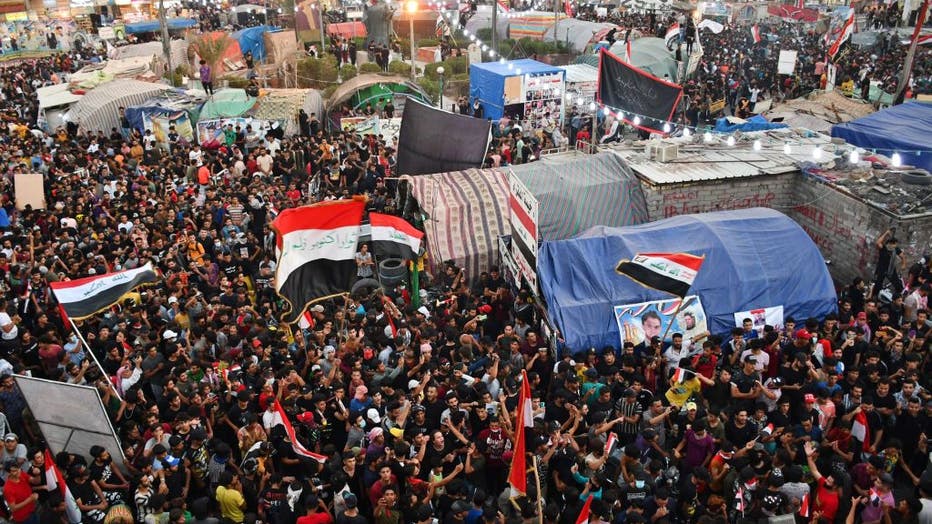 FILE - Iraqi protesters start an indefinite sit-in at al-Haboubi Square in the southern city of Nasiriyah in Dhi Qar province on October 25, 2020, during the first anniversary of a mass anti-government movement. (ASAAD NIAZI/AFP via Getty Images)

At least six protesters were also wounded, according to an security and medical officials, who requested anonymity in line with regulations.

The demonstrations Sunday were considered a test of the movement's strength following months of inactivity on the street. Despite reaching historic numbers in late 2019 and successfully mounting pressure on elites, the protests have been largely dormant in the wake of the coronavirus pandemic. Activists also blamed the drop in numbers on a violent crackdown by Iraqi security forces and militia groups, as well as kidnappings and targeted assassinations.

The renewed protests were also a test for Prime Minister Mustafa al-Kadhimi, just five months in power. Al-Kadhimi has been vocal about his support for the protester's demands. His government came to power following the resignation of Prime Minister Adil Abdul-Mahdi late last year. He stepped down under pressure from protests sparked by security forces' heavy-handed response, including the use of live rounds and the killing of demonstrators.

More than 500 people were killed during the months-long protest movement, many of them demonstrators shot by Iraqi security forces.

The current administration cannot afford to do the same, al-Kadhimi's advisors have said. The government is also grappling with a severe liquidity crisis amid low oil prices that has slashed state coffers by half.

Mustafa Hussein, in his 20s, participated in the demonstrations last year and returned to Baghdad’s Tahrir Square on Sunday. He said little had changed.

“Our demands that we wrote with the blood of our martyrs are still on the lists of officials, without implementation,” he said.

The bridges across the Tigris River where clashes broke out lead to the heavily fortified Green Zone, which houses government buildings and foreign embassies. Both bridges have been closed off by security forces since last year to prevent protesters from storming across. They were again fortified in the days leading to Sunday's protest, with a heavy security presence on the streets.

Hundreds of demonstrators were also prevented from entering Baghdad at checkpoints on roads from the provinces of Babylon and Diwanieh, due to an order by the Baghdad Operations Command, which oversees security forces in the capital.

In Baghdad's Tahrir Square, which has been the epicenter of the protest movement, Iraqi youth carried banners with portraits of those killed by Iraqi security forces. In some cases, tear gas cannisters struck the heads of demonstrators, killing them instantly.

“Today we mark the memory of the October Revolution, especially those fallen,” said Fadel Ahmed, 25, a graduate of economics. “Our demands are against corrupt parties in power and against the failed parliament."

In October of last year, tens of thousands of Iraqis — mostly young people — marched in Baghdad and cities in the south to decry government graft, unemployment and poor services. Demonstrators took over public squares in Baghdad and camped out for months, refusing to leave until their demands were met.

The movement had early successes. Al-Kadhimi, the current prime minister, has presented himself a champion of the protesters' demands, appointing long-time activists among his close group of advisors. In prerecorded address Saturday night, he promised that early elections — a key demand of protesters — would be held next June.

Despite the crackdowns from militias and the government, protesters say their movement is still alive.

“We have only this revolution to achieve our goals,” Ahmed said. “If it can’t, Iraq will be lost.”