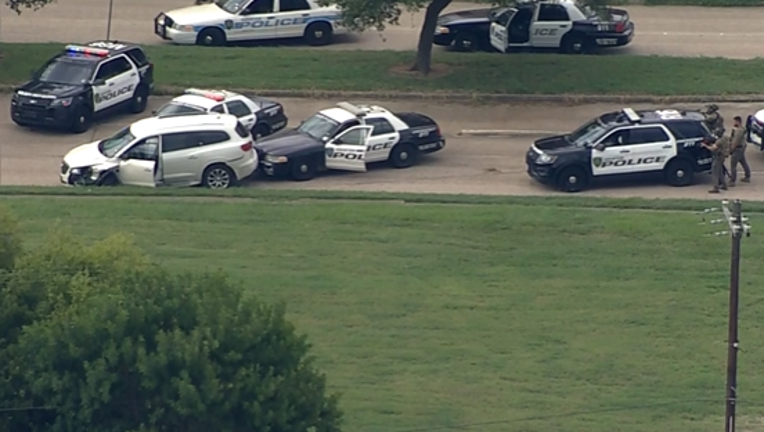 HOUSTON - A carjacking suspect has been taken into custody after being barricaded in a vehicle in southwest Houston for at least two hours.

Police say around 11 a.m. Wednesday in the Clear Lake area, a 77-year-old woman reported being the victim of a carjacking, in which she was thrown to the ground and hit her head. The victim then reported the car stolen.

Around 3 p.m., a Houston police officer saw the vehicle, ran the plates, and confirmed it was reported stolen.

A pursuit, involving several police units, was then underway.

SWAT Commander Larry Baimbridge reported that the stolen vehicle, described as a Buick SUV, crashed into two vehicles, and a tree during the pursuit, before coming to a complete stop in the 4400 block of North Braeswood Blvd.

Several Houston police units and SWAT teams were on the scene of a barricaded suspect in a stalled vehicle in SW Houston.

Commander Baimbridge says the suspect claimed to have a baby inside the vehicle with him and would kill it if police wouldn't leave the scene. He used items that were in the Buick to obstruct their view inside the vehicle.

SWAT members eventually confirmed there was no baby inside the vehicle and looked to non-lethal measured to get the suspect out.

Officers put CS gas into the vehicle until the suspect, who had a large knife, surrendered just before 6 p.m.

A doctor was on scene and determined the suspect, identified as a white male likely in his 30s, was high on an unknown substance. So he was transported to a local hospital, where he'll be evaluated before being booked into Harris County Jail.