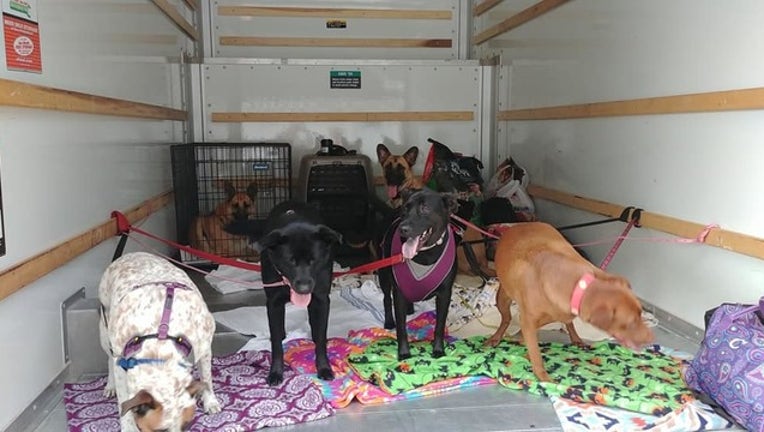 MYRTLE BEACH, S.C. (KTVU) - A group of strangers from around the country came together to help a help a woman who was planning to "hunker down" with her seven dogs in Hurricane Florence.

As Christine Meinhold spoke on CNN about how she didn't have a working car and was unable to evacuate from Myrtle Beach, people around the country became concerned.

Meinhold told CNN that she was responsible for her seven rescue dogs and refused to abandon them.

Multiple people reached out to Meinhold to offer help and advice. A total of 15 strangers began messaging with Meinhold on possible solutions.

Trudy Schilder tells KTVU after several of the plans fell through, the group of strangers raised funds for a U-Haul van to bring Meinhold and her seven rescue dogs to safety.

Schilder posted updates of Meinhold's evacuation on Facebook saying "With prayers and amazing people she is loading up the rented truck and getting ready to go. Prayers for safe travels... and all of those in the path of Florence." She posted photos of the dogs preparing for their journey.

Meinhold and her nephew - along with her dogs - drove overnight and arrived in Tennessee around 4 a.m. Friday to wait out the hurricane.

Schilder is relieved the group of evacuees is safe and sound. She later posted an update saying, "What a group of humankind that found their way to each other. One dark and stormy night,15 amazing, kind, compassionate humans came together to make this happen."

Along with the post, she shared a photo of all seven dogs on their journey to Tennessee.