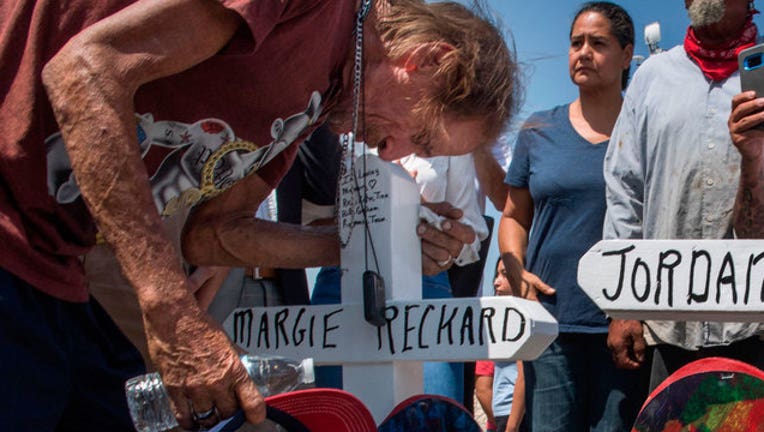 Antonio Basbo kisses the cross with the name of his common-law wife Margie Reckard, who died in El Paso shooting, at a makeshift memorial in El Paso, Texas, on August 5, 2019. Photo courtesy Mark Ralston/AFP/Getty Images.

EL PASO, Texas (AP) - A man whose 63-year-old wife was among the Texas mass shooting victims says he has no other family and welcomes anyone wanting to attend her services in El Paso.

Margie Reckard was among 22 people fatally shot on Aug. 3 at a Walmart in El Paso. Reckard and Antonio Basco were married 22 years.

Perches Funeral Homes director Harrison Johnson said Wednesday that Reckard has children and grandchildren. Johnson says Basco has no family in El Paso or elsewhere that funeral home officials have been made aware.

Johnson says the funeral home is preparing for a "multitude" of mourners.

A prayer service will be held at 7 p.m. Friday at the funeral home, at 4946 Hondo Pass Dr. Reckard's funeral is at 9 a.m. Saturday at Restlawn Cemetery.