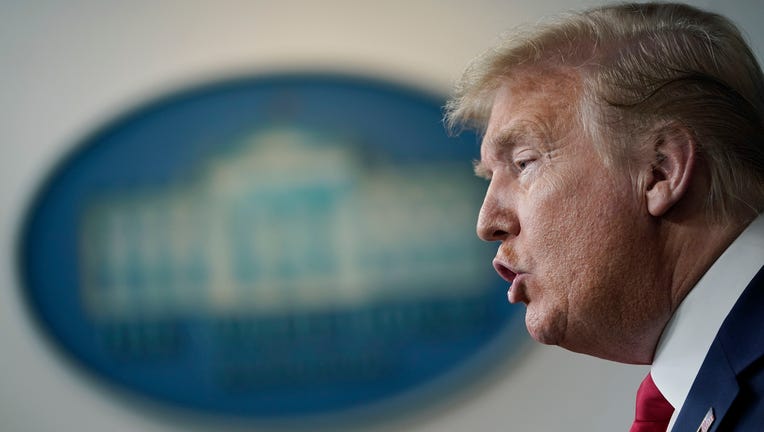 President Donald Trump speaks during the daily briefing of the Coronavirus Task Force at the White House on April 22, 2020 in Washington, D.C. (Photo by Drew Angerer/Getty Images)

WASHINGTON -  WASHINGTON (AP) -- The day he declared the COVID-19 pandemic a national emergency, President Donald Trump made a cryptic offhand remark.
"I have the right to do a lot of things that people don't even know about," he said at the White House.
Trump wasn't just crowing. Dozens of statutory authorities become available to any president when national emergencies are declared. They are rarely used, but Trump last month stunned legal experts and others when he claimed -- mistakenly -- that he has "total" authority over governors in easing COVID-19 guidelines.
That prompted 10 senators to look into how sweeping Trump believes his emergency powers are.
They have asked to see this administration's Presidential Emergency Action Documents, or PEADs. The little-known, classified documents are essentially planning papers.
The documents don't give a president authority beyond what's in the Constitution. But they outline what powers a president believes that the Constitution gives him to deal with national emergencies. The senators think the documents would provide them a window into how this White House interprets presidential emergency powers.
"Somebody needs to look at these things," Sen. Angus King, I-Maine, said in a telephone interview. "This is a case where the president can declare an emergency and then say, `Because there's an emergency, I can do this, this and this.'"
King, seven Democrats and one Republican sent a letter late last month to acting national intelligence director Richard Grenell asking to be briefed on any existing PEADs. Sen. Patrick Leahy, D-Vt., wrote a similar letter to Attorney General William Barr and White House counsel Pat Cipollone.
"The concern is that there could be actions taken that would violate individual rights under the Constitution," such as limiting due process, unreasonable search and seizure and holding individuals without cause, King said.
"I'm merely speculating. It may be that we get these documents and there's nothing untoward in their checks and balances and everything is above board and reasonable."
Joshua Geltzer, visiting professor of law at Georgetown University, said there is a push to take a look at these documents because there is rising distrust for the Trump administration's legal interpretations in a way he hasn't seen in his lifetime.
The most publicized example was Trump's decision last year to declare the security situation along the U.S.-Mexico border a national emergency. That decision allowed him to take up to $3.6 billion from military construction projects to finance wall construction beyond the miles that lawmakers had been willing to fund. Trump's move skirted the authority of Congress, which by law has the power to spend money in the nation's wallet.
"I worry about other things he might call an emergency," Geltzer said. "I think around the election itself in November -- that's where there seems to be a lot of potential for mischief with this president."
The lawmakers made their request just days after Trump made his startling claim on April 13 that he had the authority to force states to reopen for business amid the pandemic.
"When somebody's the president of the United States, the authority is total," Trump said, causing a backlash from some governors and legal experts. Trump later tweeted that while some people say it's the governors, not the president's decision, "Let it be fully understood that this is incorrect."
Trump later backtracked on his claim of "total" authority and agreed that states have the upper hand in deciding when to end their lockdowns. But it was just the latest from a president who has been stretching existing statutory authorities "to, if not beyond, their breaking point," said Stephen Vladeck, a law professor at the University of Texas.
Questions about Trump's PEADs went unanswered by the Justice Department, National Security Council and the Office of the Director of National Intelligence.
Elizabeth Goitein, co-director of a national security program at the Brennan Center for Justice at New York University School of Law, said PEADs have not been subject to congressional oversight for decades. She estimates that there are 50 to 60 of these documents, which include draft proclamations, executive orders and proposed legislation that could be swiftly introduced to "assert broad presidential authority" in national emergencies.
She said the Eisenhower administration had PEADs outlining how it might respond to a possible Soviet nuclear attack. According to the Brennan Center, PEADs issued up through the 1970s included detention of U.S. citizens suspected of being subversives, warrantless searches and seizures and the imposition of martial law.
"A Department of Justice memorandum from the Lyndon B. Johnson administration discusses a presidential emergency action document that would impose censorship on news sent abroad," Goitein wrote in an op-ed with lawyer Andrew Boyle published last month in The New York Times.
"The memo notes that while no `express statutory authority' exists for such a measure, `it can be argued that these actions would be legal in the aftermath of a devastating nuclear attack based on the president's constitutional powers to preserve the national security."'
Goitein said she especially worries about any orders having to do with military deployment, including martial law.
"You can imagine a situation where he (Trump) engineers a crisis that leads to domestic violence, which then becomes a pretext for martial law," said Goitein, who insists she's simply playing out worst-case scenarios.
She said she wonders if there is a PEAD outlining steps the president could take to respond to a serious cyberattack. Would the president aggressively interpret telecommunications law and flip an internet kill switch, or restrain domestic internet traffic? she asks.
Bobby Chesney, associate dean at the University of Texas School of Law, said some fears might be exaggerated because while Trump makes off-the-cuff assertions of authority far beyond past presidents, he doesn't necessarily follow up with action.
Says Chesney: "His actions don't match the rhetoric always -- or even often."