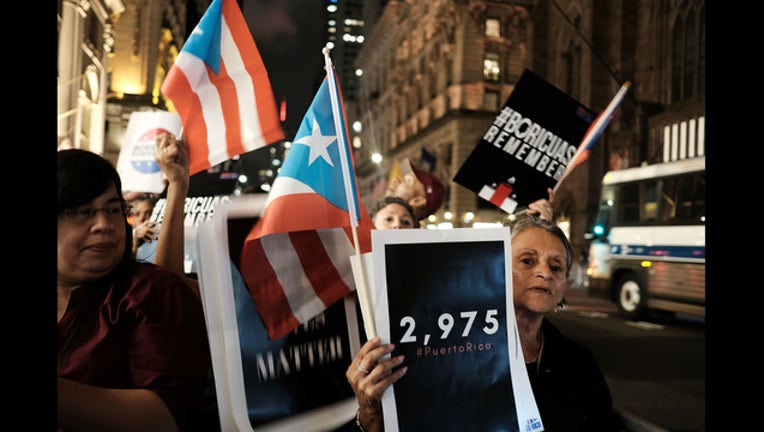 NEW YORK, NY - SEPTEMBER 20: People march to Trump Tower following a service at St. Bartholomew's Church for the one year anniversary of Hurricane Maria which cut through Puerto Rico exactly one year ago today on September 20, 2018

WASHINGTON, DC - President Donald Trump on Monday declared himself an "absolute no" on statehood for Puerto Rico as long as critics such as San Juan's mayor remain in office, the latest broadside in his feud with members of the U.S. territory's leadership.

Trump lobbed fresh broadsides at San Juan Mayor Carmen Yulín Cruz, a critic of his administration's response to hurricanes on the island last year, during a radio interview with Fox News' Geraldo Rivera that aired Monday.

"With the mayor of San Juan as bad as she is and as incompetent as she is, Puerto Rico shouldn't be talking about statehood until they get some people that really know what they're doing," Trump said in an interview with Rivera's show on Cleveland's WTAM radio.

Trump said that when "you have good leadership," statehood for Puerto Rico could be "something they talk about. With people like that involved in Puerto Rico, I would be an absolute no."

Gov. Ricardo Rossello, an advocate of statehood for the island, said Trump's remarks had trivialized the statehood process because of political differences.

"The president said he is not in favor of statehood for the people of Puerto Rico based on a personal feud with a local mayor. This is an insensitive, disrespectful comment to over 3 million Americans who live in the U.S. territory of Puerto Rico," Rossello said.

He also questioned how the president of the United States could be at the U.N. General Assembly promoting democracy around the world while "in his own home there is the oldest and most populated colonial system in the world."

Cruz responded on Twitter: "Trump is again accusing me of telling the truth. Now he says there will be no statehood because of me."

Jenniffer Gonzalez, Puerto Rico's non-voting representative in Congress, tweeted: "Equality 4 Puerto Ricans shouldn't be held up by one bad mayor who's leaving office in 2020 & do not represent the people who voted twice for statehood."

Trump's position on statehood for the island puts him at odds with the Republican Party's 2016 platform during its national convention, in which it declared support for Puerto Rican statehood.

The president's remarks followed his claims earlier this month that the official death toll from last year's devastating storm in Puerto Rico was inflated. Public health experts have estimated that nearly 3,000 people died in 2017 because of the effects of Hurricane Maria.

But Trump falsely accused Democrats of inflating the Puerto Rican death toll to make him "look as bad as possible."

Trump's pronouncements have roiled politics in Florida, which has crucial races for governor and U.S. Senate. The state was already home to more than 1 million Puerto Ricans before Hurricane Maria slammed into the island a year ago. Tens of thousands of residents fled Puerto Rico in the aftermath, with many of them relocating to Florida.

The issue of statehood for Puerto Rico - or some form of semi-autonomous relationship - has divided island residents in recent years. The debate over the island's "status" is the central feature of its politics and divides its major political parties.

The federal government has said previously it would accept a change in the status of Puerto Rico if the people of the island clearly supported the decision. But for decades, Puerto Ricans have been divided between those who favor statehood and those who want to maintain the commonwealth, perhaps with some changes. A small minority continue to favor independence.

The last referendum, in 2017, strongly supported statehood but opponents questioned the validity of the vote because of low turnout.

Any changes would need to be approved by Congress. Statehood legislation, with support from Republicans and Democrats, was introduced in June but appears unlikely to gain momentum as politicians remain hesitant to take up such a thorny issue.