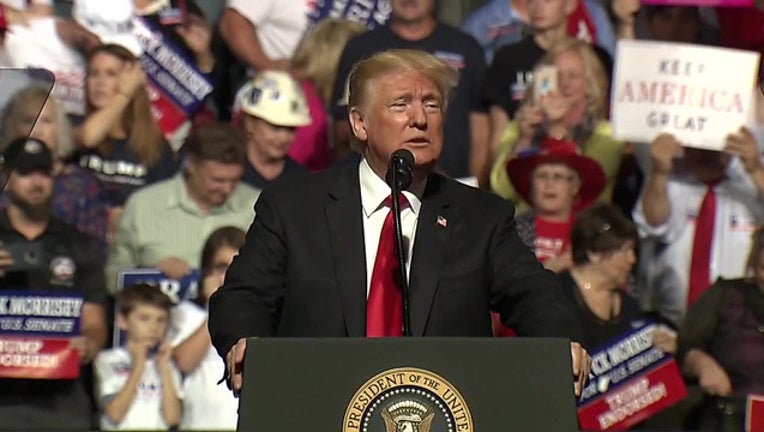 WASHINGTON (AP) - Another state and another campaign rally for President Donald Trump - this time in West Virginia.

Trump was appearing in Wheeling on Saturday a day after he reversed course and ordered a new FBI investigation of Brett Kavanaugh, whose nomination to the Supreme Court was upended when a California woman accused him of sexually assaulting her when they were teenagers.

Democrats and some Republicans had been asking for the new investigation. It will delay by at least a week a Senate vote on confirming Kavanaugh, who would fill an opening and help shift the high court's balance to the right.

Kavanaugh's path to becoming a justice was complicated earlier this month after psychology professor Christine Blasey Ford accused him of groping her and trying to remove her clothing after he pinned her to a bed at a gathering in Maryland in the early 1980s.

At least two other women have also accused Kavanaugh, a federal appeals court judge, of past sexual misconduct.

Kavanaugh denies the allegations and angrily defended himself in sworn testimony before the Senate Judiciary Committee on Thursday. Ford described the assault as she also gave separate sworn testimony to the committee earlier that day.

The panel followed up Friday by voting 11-10, along strict party lines, to recommend that the full Senate confirm Kavanaugh for the Supreme Court. But one committee member, Sen. Jeff Flake, R-Ariz., balked at voting for confirmation without the investigation. Republican leaders want Kavanaugh seated on the court before the Nov. 6 election and could do little but agree to Flake's demand.

Flake asked for the investigation to be limited in scope and last no more than a week.

Trump also agreed to an investigation after he had vigorously resisted asking the FBI - an agency he has repeatedly criticized - to look into the sexual assault and misconduct allegations. In defending Kavanaugh, Trump and other supporters note that the allegations had never surfaced in six previous background checks during Kavanaugh's long career in the executive and judicial branches of the U.S. government.

Trump continued to stand by Kavanaugh, saying late Friday on Twitter that "He will someday be recognized as a truly great Justice of The United States Supreme Court!"

Trump's visit to West Virginia is intended to help rally support for GOP candidates in the November elections, including Senate nominee Patrick Morrisey. The Democratic incumbent, Joe Manchin, faces a tough road to re-election in a state Trump won by 42 points in 2016.

Manchin supports the new FBI probe of Kavanaugh but has yet to announce his position on the nominee.

During a campaign rally last month in Charleston, Trump criticized Manchin for supporting Democrat Hillary Clinton, Trump's rival in the 2016 presidential race, as well as for joining all Senate Democrats in voting against massive tax cuts Trump signed into law last year.

Manchin voted for Neil Gorsuch, Trump's first nominee to the Supreme Court. Trump would also like Manchin's vote for Kavanaugh.

West Virginia, at least on paper, offers Trump's GOP perhaps its best Senate pickup opportunity on Nov. 6, when Republicans hope to build on their tenuous 51-49 split in the chamber. But it's unclear if the president's popularity statewide is enough to deny Manchin a second full term.

Manchin is a former governor who has held elected office in West Virginia for much of the past three decades and has crafted a personal brand that has appealed to independents and some moderate Republicans - voters he'll need this fall.

Polls also give Manchin a significant lead over Morrisey, the state attorney general. Manchin has said he'll work with Trump when it's in West Virginia's interest to do so and he'll oppose the president when it is not.

Manchin is among a handful of vulnerable Senate Democrats who represent states that Trump won, including Montana Sen. Jon Tester and Missouri Sen. Claire McCaskill, who are in stronger-than-expected positions less than six weeks before Election Day.

The red-state Democrats are particularly vulnerable on the roiling debate over Kavanaugh.

While the sexual misconduct allegations may resonate in closely contested states or suburban House districts, less-educated rural voters in states like West Virginia are more likely to side with Trump.

Saturday's rally is one of many Trump plans to headline as part of a commitment to campaign aggressively - he has said seven days a week, if necessary - to help the Republican Party overcome significant Democratic opposition and anger and keep control of both houses of Congress.

He has campaign rallies scheduled next week in Tennessee, Mississippi and Kansas.