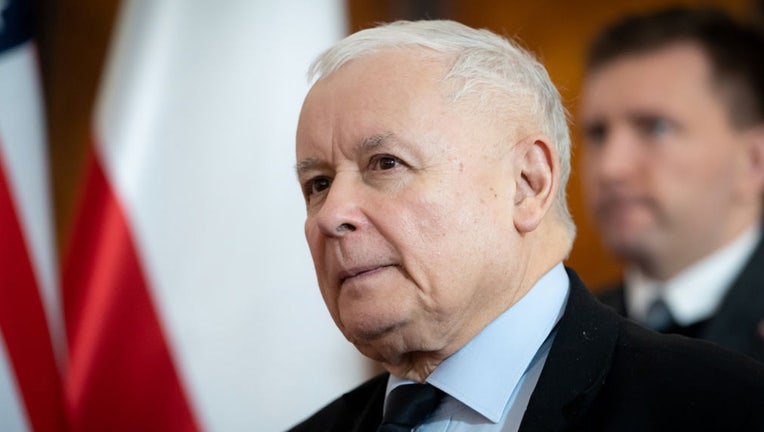 WARSAW, Poland - A women's rights group in Poland on Monday urged people to demonstrate after the country's ruling party leader claimed that Poland's low birthrate is partly caused by young women drinking too much alcohol.

Opposition politicians, activists and celebrities accused Jaroslaw Kaczynski, a 73-year-old bachelor, of being out of touch. They also argue that Kaczynski, the most powerful politician in Poland since 2015, is himself partly responsible for the low birthrate in the central European nation of 38 million people.

In particular, critics point to increased restrictions on abortion that have discouraged some women from seeking to get pregnant. Others note the difficulty that young people have in raising families amid inflation that is reaching nearly 18%.

A women's rights group voiced fury at Kaczynski's comment and urged people to protest in front of Kaczynski's Warsaw home on Nov. 28, the 104th anniversary of women gaining the right to vote in Poland.

"The cretinous words of an old geezer about Polish women that women do not give birth to children because they drink (and not because Poland is hell), this is only a fragment of our reality," the Women's Strike wrote Monday on Facebook.

The group said there were many reasons for country's low birthrate, including Poland's de facto prohibition of abortion, a lack of access to sexual education and in vitro procedures, inflation, a housing shortage and a lack of access to day care centers.

Kaczynski, leader of the populist ruling party, Law and Justice, spoke Saturday about the demographic challenges of "far too few children" being born as he rallied support for his party ahead of next year’s parliamentary election.

"And here it is sometimes necessary to say a little openly, some bitter things. If, for example, the situation remains such that, until the age of 25, girls, young women, drink the same amount as their peers, there will be no children," Kaczynski said.

He claimed, without any medical proof, that to develop alcoholism, the average man "has to drink excessively for 20 years" but "a woman only two."

The remark also triggered predictable jokes along the lines of alcohol being helpful to conception.

The traditionally Roman Catholic country already had one of Europe's most restrictive abortion laws, with abortions allowed in very few cases, before 2020. Then, a new ruling said that women may no longer terminate pregnancies in cases where the fetus has serious abnormalities and is not viable after birth.

That sparked the largest protests in Poland in decades, which were led by Women's Strike. There have since been cases of pregnant women dying even though a risk to the woman's life remains a legal grounds for abortion under the current law. Women's rights advocates say such cases occur because doctors are afraid to terminate pregnancies even when the woman's life might be at risk, fearing legal consequences.

The number of births per woman in Poland has plummeted from 3 children per woman in 1960 to 1.2 in 2003, according to the World Bank.

It began rising again somewhat after 2003, and got a boost after Kaczynski's government introduced a monthly cash benefit of 500 zlotys ($108) per child after winning power in 2015, hoping to encourage larger families.

But the birthrate is again declining and Kaczynski admitted last month the program isn't working as intended. The birthrate stood at 1.32 children per woman in 2021, according to Polish state statistics.