Houston Police are hoping new video will help solve the murder of a man who was shot and killed in front of his 7-year-old daughter back in June.

Surveillance video released Thursday shows the killer minutes before he opened fire, walking a path next to his victim’s home--La Terraza Apartments on Braeburn Glen Boulevard in Southwest Houston.

Another camera angle shows the suspect waited for his victim in the entrance of the laundry building, feet from Rigoberto’s front door. When Rigoberto walked by, video shows the gunman ran out from hiding and started shooting.

“Our suspect—the coward that he was—ran up behind Rigoberto and shot him several times in the back," said Detective Alexander Vinogradov with Houston Police. “His seven-year-old opened the door and saw her father take his last breath right in front of her, so that in itself should be enough for someone to come forward and call and say, hey look: let’s get justice for her.” 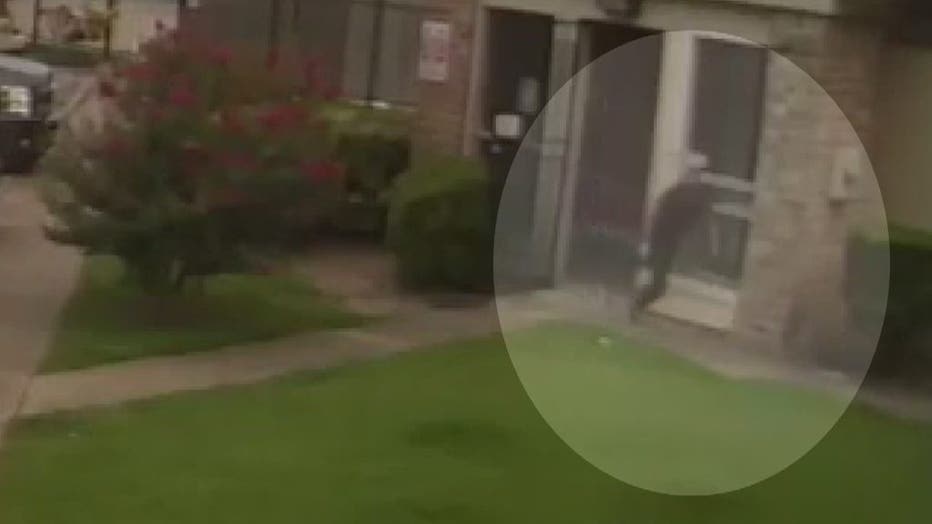 Homicide detectives are hoping someone will recognize the man--described as Hispanic in his 20s or 30s--responsible for killing Rigoberto Vargas as he was walking up to his front door, coming home from work June 11.

“The ambush was planned," said Vinogradov. “He sat there for an extended amount of time, wearing dark clothing and it appears like a gray hat—maybe with a Boston Celtics logo on it. As he waited for Rigoberto, he put on some blue latex—looks like surgical--gloves, and ran up to Rigoberto and shot him in the back several times before running back and hopping the fence to an adjacent apartment complex and disappearing like a ghost.”

The victim’s brother spoke at the press conference with police and Crime Stoppers, which is offering a $5 thousand reward for information leading to an arrest.

“He’s really hurting right now, so he’s just begging the community, please do something," said one officer, translating Jose Sarmiento's Spanish. "If you saw something, say something.... His brother wasn’t involved in anything. He didn’t have beefs with anybody.”

If you have any information that could help solve the case, call Crime Stoppers at 713-222-TIPS. All calls are anonymous.