Some regions have received more than a month's rainfall in just 24 hours, according to local reports.

SYDNEY - Storms were drenching parts of Australia this week, offering relief for firefighters battling deadly flames that have plagued the country — but also bringing the potential for flash flooding and other damage across fire-affected areas.

After suffering through one of the driest December months on record, multiple regions across the country received more than a month’s worth of rain in just 24 hours, Australia’s 9 News reported.

“After widespread storms and heavy rain across the east of Australia, more than ten communities across (Queensland, Victoria and New South Wales) have received their best rainfall in years,” the outlet reported. 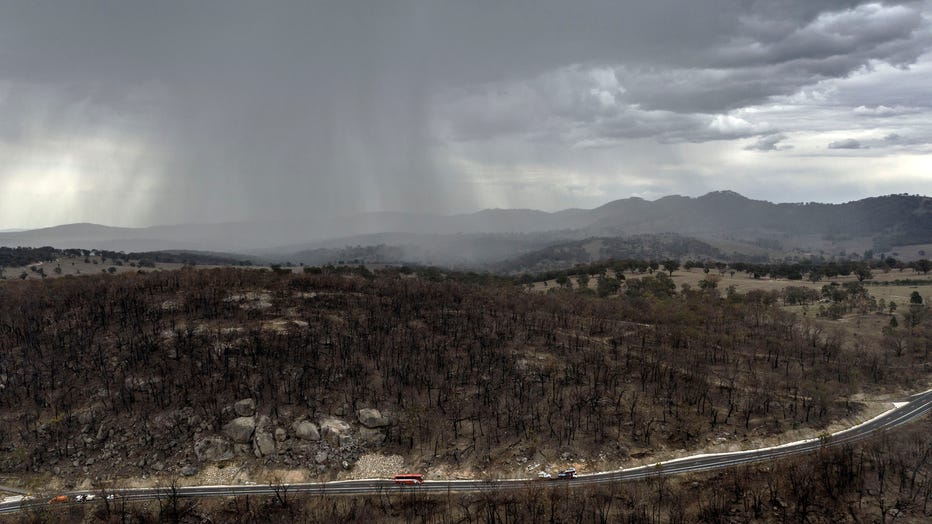 An aerial view as rain begins to fall on the drought and fire-ravaged country ahead of predicted further wet weather across New South Wales and Victoria on Jan. 15, 2020 in Tamworth, Australia. (Photo by Brook Mitchell/Getty Images)

So far, Australia’s bushfires have claimed at least 28 lives since September, destroyed more than 2,600 homes and burned more than 25.5 million acres, mostly in New South Wales. The area burned is larger than the U.S. state of Indiana.

But officials said rain this week has diminished the fire danger in several areas.

“Relief is here for a number of firefighters working across NSW. Although this rain won’t extinguish all fires, it will certainly go a long way towards containment,” the New South Wales Rural Fire Service wrote on Twitter.

Earlier in the week, the fire agency said if the rainfall forecast came to fruition, it would be their “Christmas, birthday, engagement, anniversary, wedding and graduation presents rolled into one.”

While the rain came as welcome news for many, severe thunderstorms also triggered flash flooding and sinkholes, as well as downed trees in Victoria. The Victoria State Emergency Service posted several photos on social media highlighting damage from the storm.

The storm also led to thousands of power outages across New South Wales.

The massive rain event was expected to move across the eastern parts of Australia, bringing consecutive days of rain and storms into the weekend, according to 9 News.

“The hit & miss nature of #thunderstorms means it's difficult to forecast exactly where the heaviest rain will be,” the Bureau of Meteorology in Australia wrote on Twitter. “Some parts of #bushfire & #drought affected eastern Australia could see (2-4 inches) over the next few days; while others may see very little.”

Meanwhile, rescuers have worked to save wildlife by dropping vegetables from the air, and celebrities have donated millions of dollars toward the fire relief effort.