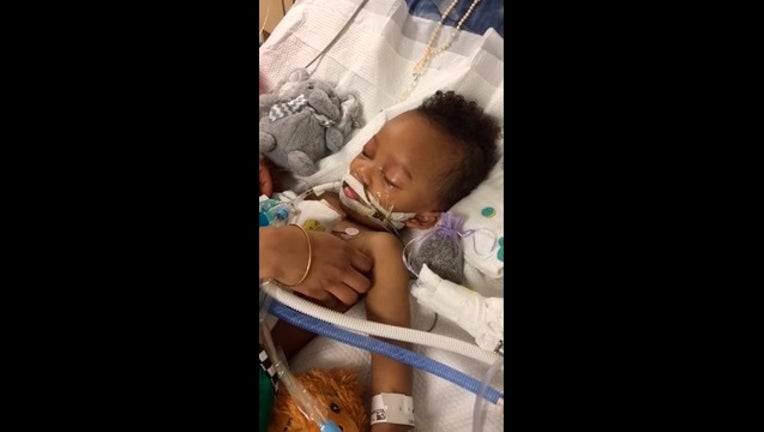 Credit: Life Legal Defense Foundation/YouTube -- This still from a video shows Israel moving after being tickled by his mother. This video was posted on Israel's GoFundMe page.

ROSEVILLE, CA - The parents of a 2-year-old boy are fighting to keep their son alive after doctors reportedly declared him brain dead.

According FOX40, 2-year-old Israel Stinson was hospitalized at the beginning of April by an asthma attack. That’s when they said things took a turn for the worse.

Pediatrician Dr. Angelica Ha told FOX40, "Standards that are accepted by the medical community. We follow those in terms of brain death determination."

Israel’s parents say that the determination has medical and legal repercussions that are not right for their son.

On Monday, Jonee Fonseca and Nate Stinson are expected to hear from a federal judge whether they are permitted to force doctors to give Israel a ventilator tube and feeding tube.

A video of Israel in his hospital bed shows him clearly moving after being tickled and touched by his mother.

"In brain death we know there are instances where patients appear to move. These are involuntary reflexes that come from the spinal cord," Ha said. "So they may look like twitches or muscle contractions, and that can be very difficult for people to see. But in brain death, the brain is not functioning. It's an irreversible condition."

Doctors at Kaiser Permanente Hospital, where Israel is now, will not comment on the specific case because of patient confidentiality, FOX40 reports.

"We understand that he's not exactly as we want him to be. But that's doesn't mean we have to start planning a funeral," Jonee told FOX40.

The family has started a GoFundMe account to take Israel to New Jersey where the laws that govern death, and brain death, differ from those in California.

However, they will not be able to transport him without feeding and air tubes, and these procedures will not be performed by California hospitals on a brain dead patient.