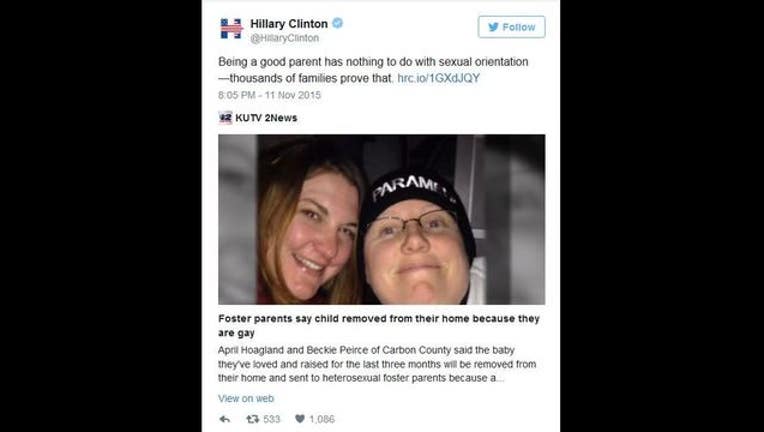 SALT LAKE CITY (AP) — Utah state child welfare officials are reviewing a ruling by a juvenile court judge who ordered a baby to be taken from lesbian foster parents and instead placed with a heterosexual couple for the child's well-being.

Its attorneys plan to review the decision and determine what options they have to possibly challenge the order.

The ruling came during a routine hearing for April Hoagland and Beckie Peirce. They are part of a group of same-sex married couples who were allowed to become foster parents in Utah after last summer's U.S. Supreme Court ruling that made gay marriage legal across the country, Sumner said.

Attempts to reach Hoagland and Peirce on Wednesday were unsuccessful, but the couple told KUTV (http://bit.ly/1Sjph1o) that they are distraught after the ruling that calls for the baby girl they have been raising for three months to be taken away within a week.

They said Judge Johansen cited research that children do better when they are raised by heterosexual couples. Hoagland believes the judge actually imposed his religious beliefs.

"We are shattered," she told the Salt Lake City TV station. "It hurts me really badly because I haven't done anything wrong."

State officials don't keep an exact count but estimate there are a dozen or more foster parents who are married same-sex couples.

A full transcript of his ruling has not been made public and may not be because court records of cases involving foster children are kept private to protect the kids, Sumner said.

Sumner said she can't speak to specifics of the case but confirmed that the couple's account of the ruling is accurate — the judge's decision was based on the couple being lesbians. The agency isn't aware of any other issues with their performance as foster parents.

The agency is tasked with trying to keep children with one family as long as the parents are providing adequate care.

All couples are screened before becoming foster parents.

"We just want sharing, loving families for these kids," Sumner said. "We don't really care what that looks like."

The ruling triggered a heated response from the Human Rights Campaign. The gay rights group called the order shocking, outrageous and unjust.