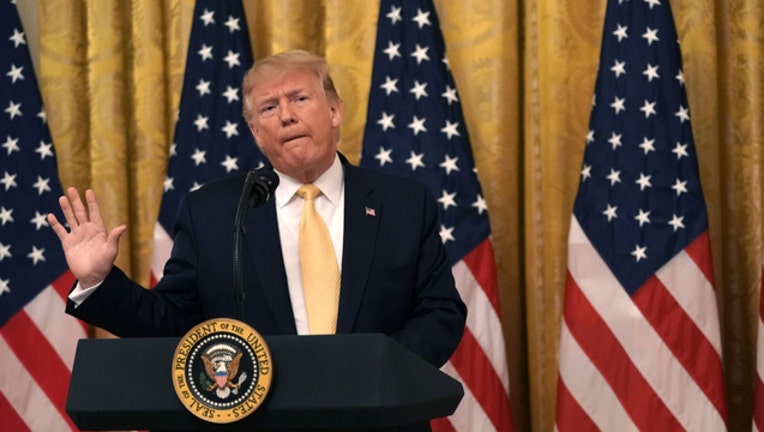 WASHINGTON (AP) - More than half of House Democrats support launching an impeachment inquiry, according to a tally by The Associated Press - a strong signal of ongoing liberal frustration with President Donald Trump but a milestone that seems unlikely to move House Speaker Nancy Pelosi.

Rep. Salud Carbajal of California said Friday that he would support such an inquiry - the beginning of proceedings that could lead up to an impeachment vote - tipping the tally to 118, or a majority of the 235 House Democrats. But that comes as Pelosi has remained steadfast that she wants to finish investigations that are already underway before making a final decision. She has signaled since she became speaker in January that she is unwilling to move toward impeachment without a groundswell of public support.

Impeachment supporters had hoped that former special counsel Robert Mueller's testimony last month would be the tipping point, and more than two dozen Democrats have called for a beginning to proceedings since then. But those calls were muddled by House Judiciary Committee Chairman Jerrold Nadler's assertion that the committee is essentially already doing the work of impeachment, with or without a formal House vote.

"Too much has been made of the phrase impeachment inquiry," Nadler said, noting the panel's ongoing probes of the president and his associates.

Still, the calls for an inquiry show a growing dissatisfaction among members of the caucus, even among some of Pelosi's allies, with what is being done to stop what they see as egregious behavior by the president.

The calls for impeachment grew not only after Mueller's testimony, which detailed episodes in which Trump attempted to stop the Russia investigation, but also after Trump's racist tweets earlier this month urging four female House Democrats of color to "go back" to where they came from.

Democrats would need 218 votes to approve impeachment charges against the president, and the Republican Senate would be unlikely to vote to convict.

No Republicans have called for Trump's impeachment or an inquiry, though Republican-turned-Independent Rep. Justin Amash of Michigan announced his support for impeachment shortly after he said he read Mueller's findings about Russian interference in the 2016 election.