BERLIN - A new report shows the world is on a "catastrophic pathway" toward a hotter future unless governments make more ambitious pledges to cut greenhouse gas emissions, the head of the United Nations said Friday.

The U.N. report, reviewing all the national commitments submitted by signatories of the Paris climate accord until July 30, found that they would result in emissions rising nearly 16% by 2030, compared with 2010 levels.

Scientists say the world must start to sharply curb emissions soon, and add no more to the atmosphere by 2050 than can be absorbed, if it is to meet the most ambitious goal of the Paris accord — capping global temperature rise at 1.5 Celsius (2.7 Fahrenheit) by 2100.

The planet has already warmed by 1.1 C since pre-industrial times, experts said 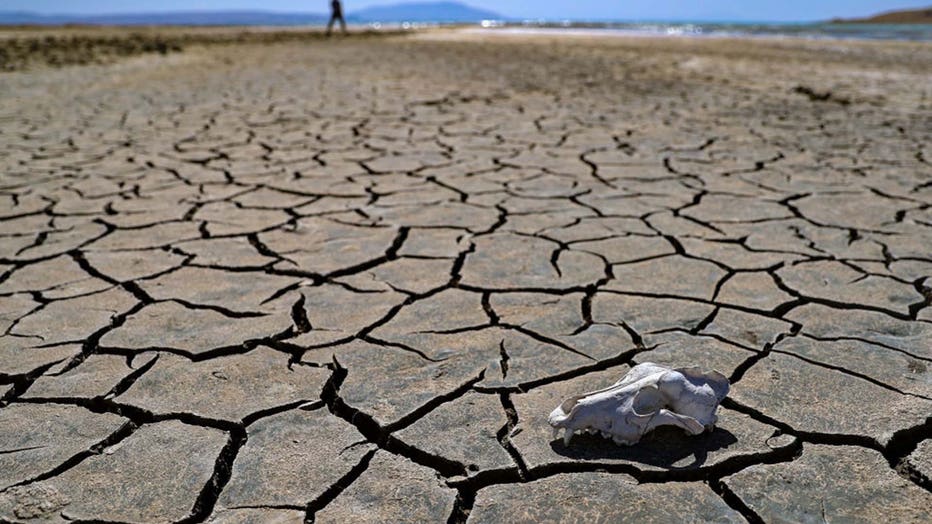 FILE - Drop in water level at Lake Van reveals a skull following high temperatures resulting in evaporation due to global warming in Van, Turkey on Sept. 17, 2021.

"We need a 45% cut in emissions by 2030 to reach carbon neutrality by mid-century," U.N. Secretary-General Antonio Guterres told a virtual meeting of leaders from major economies hosted by U.S. President Joe Biden.

"The world is on a catastrophic pathway to 2.7 degrees (Celsius) of heating," he added.

Some 113 countries including the United States and the European Union submitted updates to their emissions targets, also known as nationally determined contributions or NDCs, by the end of July. Their pledges would result in a 12% drop in emissions for those countries by the end of the decade — a figure that could more than double if some governments’ conditional pledges and assurances about aiming for carbon neutrality by 2050 are translated into action.

"That’s the positive side of the picture," said U.N. climate chief Patricia Espinosa, whose office compiled the latest report. "The other one is more sobering."

RELATED: Climate change could force over 200 million people to move by 2050, report says

Dozens of countries, including major emitters such as China and India — the world’s No. 1 and No. 3 emitters respectively — failed to submit new pledges in time for the report.

Espinosa called for leaders at next week’s annual U.N. gathering in New York to put forward stronger commitments in time for the global body’s upcoming climate summit in Glasgow.

"Leaders must engage in a frank discussion driven not just by the very legitimate desire to protect national interest, but also by the equally commanding goal of contributing to the welfare of humanity," she said. "We simply have no more time to spare, and people throughout the world expect nothing less."

Espinosa added that some public pledges, such as China’s aim to be carbon neutral by 2060, haven’t yet been formally submitted to the U.N. and so weren’t taken into account for the report. An update, which would include any further commitments submitted by then, will be issued shortly before the Glasgow summit, she said.

Still, environmental campaigners and representatives of some vulnerable nations expressed their disappointment at the findings.

"We must ask what it will take for some major emitters to heed the scientific findings and deliver our world from a point of no return," said Aubrey Webson of Antigua and Barbuda, who chairs the Association of Small Island States. "The findings are clear – if we are to avoid amplification of our already devastating climate impacts, we need major emitters and all G20 countries to implement and stick to more ambitious NDCs and make strong commitments to net-zero emissions by 2050."

Jennifer Morgan, the executive director of Greenpeace International, said meeting the Paris goal would only be possible with "courageous leadership and bold decisions."

"Governments are letting vested interests call the climate shots, rather than serving the global community," she said. "Passing the buck to future generations has got to stop — we are living in the climate emergency now."

Espinosa, the U.N. climate chief, said she believes the target set in Paris six years ago is still feasible.