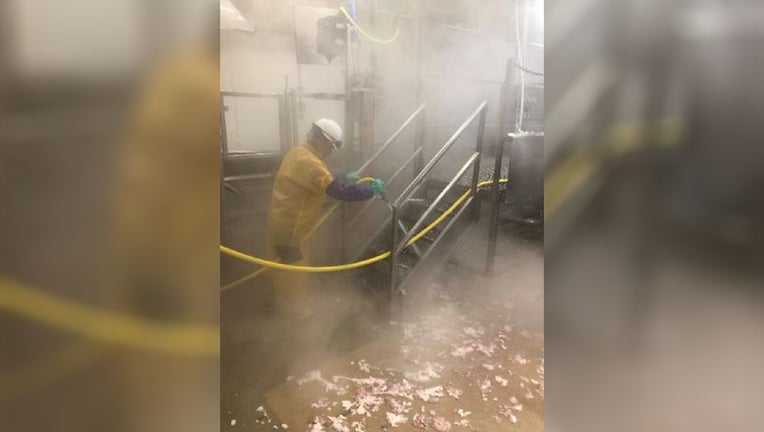 Photo showing limited visibility and condition of the floor at the Worthington JBS plant. Photo located in lawsuit document (taken by WHI Latuff)

(FOX 9) - The U.S. Department of Labor alleges an investigation uncovered a cleaning company hired more than 30 children to work in Minnesota and Nebraska slaughterhouses and meat processing facilities under hazardous conditions.

The lawsuit filed in Nebraska court on Thursday says investigators found at least 31 children aged 13 to 17 worked for the cleaning subcontractor Packers Sanitation Services (PSSI) at JBS plants in Grand Island, Nebraska, and Worthington, Minnesota, along with Turkey Valley Farms in Marshall, Minnesota.

The children often worked overnight shifts cleaning "dangerous power-driven" machines with caustic chemicals. Several children in Nebraska, including a 13-year-old, reported suffering serious chemical burns while on the job, according to the lawsuit.

Investigators say four teenagers in Minnesota ranging between 15-17 years old were contracted to work at the JBS plant in Worthington and another two teens, ages 16 and 17, worked at the Turkey Valley Farms in Marshall.

Investigators with the Wage and Hour Division (WHD) of the Department of Labor interviewed a teenager working at the JBS plant who worked from midnight to 7 a.m. cleaning heavy machinery on the kill floor. Investigators discovered the 17-year-old was just 15 when PSSI hired them.

The lawsuit states the teens would often work overnight shifts and attend school during the day. It also wasn’t uncommon for minors to use a different name while at work.

A 17-year-old working at Turkey Valley Farms allegedly told investigators while they worked for PSSI "everyone knew" the teen was a minor, according to the lawsuit.

The WHD started investigating the cleaning company after a law enforcement agency alerted the division about possible child violations in Grand Island, Nebraska. The department started its investigation in August 2022 and executed warrants for the company’s operations at the three plants, its local offices and at PSSI’s Keiler, Wisconsin, corporate office.

In October, WHD began watching the Worthington JBS facility and saw workers entering the facility who "appeared to be minors," the court documents state. WHD started to tour the JBS facilities, documented working conditions and interviewed employees, many of whom were minors.

Since the initial investigation, WDH began looking into other locations because the department has concerns that "PSSI might be employing minors at other locations." WDH reviewed photographs from eight plants and believes that based on workers' appearances, some could be minors, according to court documents.

What the law says

In all, the lawsuit claims PSSI is employing or has employed at least twelve 17-year-olds, fourteen 16-year-olds, three 15-year-olds, one 14-year-old and one 13-year-old across three slaughterhouses and meat processing facilities in Minnesota and Nebraska.

"These children, some of which were too young to be lawfully employed, were employed by (PSSI) to perform hazardous work cleaning industrial power-driven slaughtering and meat processing equipment on the kill floors…in the middle of the night. Oppressively employing minors threatens the health and welfare of vulnerable children" the lawsuit reads.

The U.S. Department of Labor asked a federal court to issue a nationwide temporary restraining order and injunction against PSSI to stop the company from illegally employing minors while the department continues its investigation, the department said in a news release.

"Federal laws were established decades ago to prevent employers from profiting by putting children in harm’s way," said Wage and Hour Regional Administrator Michael Lazzeri in Chicago. "Taking advantage of children, exposing them to workplace dangers – and interfering with a federal investigation – demonstrates Packers Sanitation Services Inc.’s flagrant disregard for the law and for the well-being of young workers."

"We take seriously the allegations against PSSI, which, if true, represent a clear violation of our ethical policies. We are immediately launching an independent, third-party audit at all of our facilities to thoroughly evaluate this situation. JBS has zero tolerance for child labor, discrimination or unsafe working conditions for anyone working in our facilities. We expect and contractually require our partners to adhere to the highest ethical principles as outlined in our Business Associate Code of Conduct," Michael Koenig, JBS Chief Ethics & Compliance Officer, said in a statement to FOX 9.

In a statement to FOX 9, PSSI said:

"PSSI has an absolute company-wide prohibition against the employment of anyone under the age of 18 and zero tolerance for any violation of that policy -- period.

"PSSI has industry-leading, best-in-class procedures to confirm the identities of its employees -- including mandatory use of the Government's E-verify system for new hires, as well as extensive training, document verification, biometrics, and multiple layers of audits.  While rogue individuals could of course seek to engage in fraud or identity theft, we are confident in our company's strict compliance policies and will defend ourselves vigorously against these claims.

"We are also surprised the DOL has taken this action given PSSI’s Corporate office has been cooperating with their inquiry, producing extensive documents and responses. ​PSSI also worked with the DOL recently and successfully completed multiple audits with the agency that found no ​issues. ​PSSI will continue to cooperate with the DOL and will continue to enforce its absolute prohibition against employing anyone under the age of 18."

FOX 9 reached out to Turkey Valley Farms for comment.