In the World Capital of Halloween, Anoka, Minnesota, they are set to carve a record-setting pumpkin into a Jack-o'-lantern.

ANOKA, Minn. (FOX 9) - The city of Anoka is saying go big or gourd home. A champion pumpkin grown in Anoka is expected to break two Guinness World Records this week.

Anoka, affectionately known as the Halloween Capital of the World, prides itself on its Halloween celebrations and now has yet another Halloween accolade to celebrate. North America's largest pumpkin is on display at Anoka City Hall, where it will be carved into the world's largest jack-o-lantern by weight and by size on Friday.

"This is good to bring the recognition to growing giant pumpkins, which brings recognition to Halloween, which Anoka is all about," said Jeremy McFarland with Anoka Halloween.

The pumpkin, known as Maverick, is 2,560 pounds. It was grown by Travis Gienger, a horticulture teacher with a background in agriculture education.

"In Minnesota, you know weather goes from 40 degrees to 90 degrees," Gienger said. "But to do it this year was pretty special."

You might say it’s squash goals: a pumpkin that has been across the country and back. 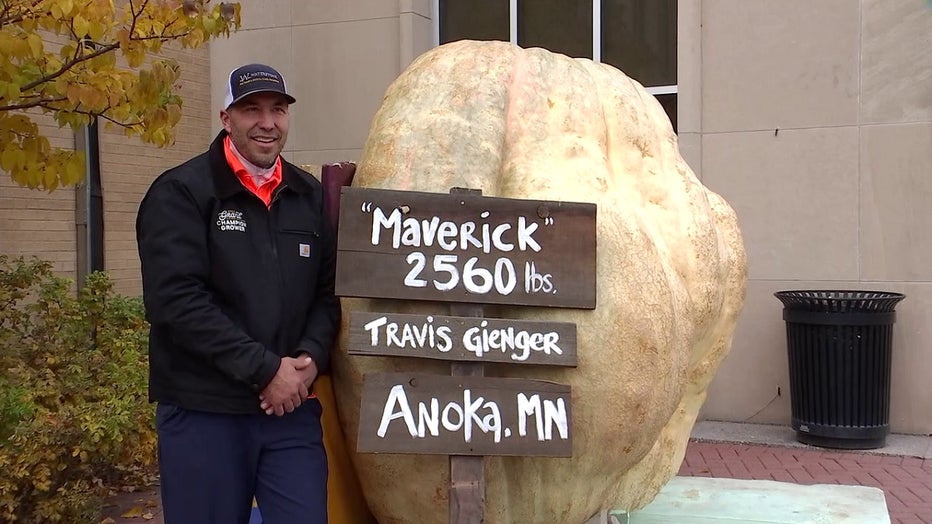 Gienger was crowned the pumpkin king earlier this month when he traveled to California, where Maverick set the new record for the country's heaviest pumpkin. He also won the contest won back in 2020.

But Gienger will say Maverick, a name that’s a nod to Top Gun, is the real story. There was a time when people questioned whether Maverick would make it, after he started out as a seed in April.

"The reason why we named it Maverick -- on Day Five, I dropped that five-gallon bucket on it, and that's where all the scars came from. And it just came back better than ever," Gienger explained.

It's set to be carved into an eagle, a symbol of the nation, in the city where the pumpkin means so much.

"It's like literally the Great Pumpkin," said Mark Marlovits, who was admiring the pumpkin outside City Hall on Thursday. "Halloween's my favorite holiday and it's nice to know that there's a town in the Midwest that sort of has Halloween every day all year long, and it is kind of significant that the greatest pumpkin ever was grown here in Anoka."