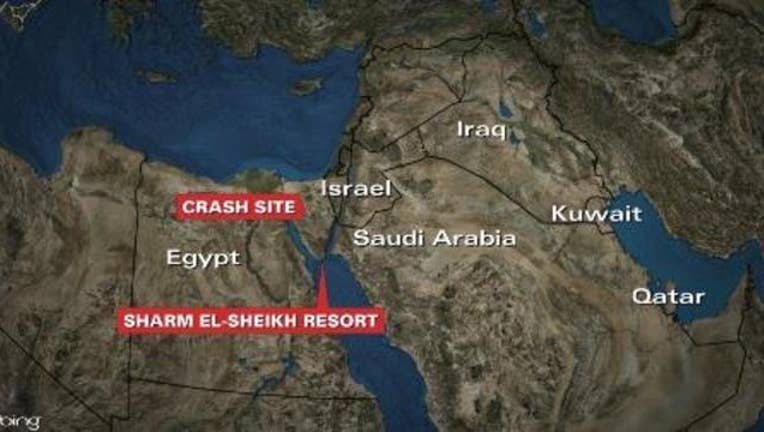 CAIRO, Egypt (AP) — The latest news on a Russian passenger plane that crashed Saturday on a flight from Sharm el-Sheikh, Egypt, to St. Petersburg, Russia.

Following the crash of a Russian plane in Egypt's Sinai Peninsula, German airline Lufthansa says it will no longer fly across the area.

A spokeswoman for Lufthansa told The Associated Press that the company had decided in a meeting Saturday that the carrier would not fly over Sinai "as long as the cause for today's crash has not been clarified."

The spokeswoman said that "security is our highest priority." She spoke on condition of anonymity in line with department policy.

For the time being, the airline will instead use detours for destinations in region.

The Islamic State group is claiming responsibility for bringing down the Russian Metrojet plane in Egypt's Sinai Peninsula — but it has have offered no evidence and is not known to have the capability to do so.

It is not clear what caused the plane crash Saturday morning that killed 224 people on the flight from Egypt to St. Petersburg. Egyptian officials say the pilot reported technical difficulties and wanted to make an emergency landing. The Metrojet crashed in an area where Egyptian forces have been battling an Islamic insurgency.

Russian Transport Minister Maxim Sokolov has scoffed at the IS claim, telling the Interfax news agency that such reports "must not be considered reliable."

Militants in northern Sinai have not to date shot down any commercial airliners or fighter jets but there have been media reports that they have acquired Russian shoulder-fired, anti-aircraft missiles. These missiles, however, are only effective against low-flying aircraft or helicopters.

Air traffic in and out of Sharm el-Sheikh was normal and a flight just took off Saturday afternoon heading to Moscow. The Egyptian resort city on the Sinai Peninsula is a favorite destination for Russian tourists.

A Russian Metrojet plane crashed Saturday morning in a mountainous region in the Sinai after taking off from Sharm el-Sheikh, killing all 224 people aboard. Officials said the pilot had reported a technical problem and was looking to make an emergency landing before radio contact with air traffic controllers went dead.

Russian investigators are searching the Moscow offices of Metrojet, the company whose chartered plane has crashed in Egypt, killing all 224 people aboard.

Officers of Russia's top investigative body, the Investigative Committee, were also questioning Metrojet employees and doing the same at the St. Petersburg-based Brisco tour agency that had contracted for the flight from the resort of Sharm el-Sheikh to St. Petersburg.

Spokesman Vladimir Markin also said investigators are taking samples of fuel from the airport in Samara where the plane was last fueled.

The plane crashed Saturday morning in a mountainous region of Egypt's Sinai Peninsula, 70 kilometers (44 miles) south of the city of el-Arish, where Egyptian security forces have for years been battling an Islamic militant insurgency.

Egypt's foreign minister has promised to work closely with Russian officials and experts to find the cause of the deadly plane crash in the Sinai Peninsula.

Foreign Minister Sameh Shoukry called his Russian counterpart to express his condolences for the victims and stressed his country's commitment "to uncover the circumstances surrounding the incident, in full cooperation and coordination with the Russian side."

Egypt and Russia have grown closer diplomatically in recent months.

Officials say all 224 people on board the Airbus A321-200 were killed in the Saturday morning crash that came 23 minutes after the plane took off from the Egyptian resort of Sharm el-Sheikh. Those on board heading to St. Petersburg included 3 Ukrainians and 221 Russians.

According to Russian news agencies, the Russian airliner was a charter flight under contract with the St. Petersburg-based Brisco tour company.

European aircraft manufacturer Airbus confirms that the Russian passenger plane that has crashed in Egypt is an A321-200.

The plane was made in 1997 and since 2012 has been operated by Metrojet, Airbus said in a written statement. The aircraft had accumulated some 56,000 flight hours in nearly 21,000 flights.

The airline manufacturer said an Airbus team of technical advisers "stands by ready to provide full technical assistance to the French Investigation Agency BEA and to the authorities in charge of the investigation."

A top Egyptian official says except for three Ukrainian passengers, everyone on board the Russian Metrojet flight that crashed in Egypt's Sinai Peninsula was a Russian citizen.

Adel Mahgoub, chairman of the state company that runs Egypt's civilian airports, spoke after officials said all those aboard the Russian charter flight from Sharm el-Sheikh to St. Petersburg were killed in the crash Saturday morning.

An Egyptian cabinet statement said the 217 passengers included 138 women, 62 men and 17 children. Seven crew, all Russian, were also aboard.

At a hotel near St. Petersburg's Pulkovo airport, the friends and relatives of those on the Metrojet flight that crashed in Egypt are gathering to grieve.

Yulia Zaitseva said her friends, a newlywed couple named Elena Rodina and Alexqander Krotov, were on the flight. Both were 33. Egyptian officials said all 224 people on the flight were Russian and there were no survivors.

Zaitseva says Saturday that her friend "really wanted to go to Egypt, though I told her 'why the hell do you want to go to Egypt?'"

She says "we were friends for 20 years. She was a very good friend who was ready to give everything to other people. To lose such a friend is like having your hand cut off."

She said Rodina's parents feel "like their lives are over."

U.S. officials have offered their condolences to Russia and to all the families involved in the crash of a Russian passenger plane in Egypt.

U.S. Secretary of State John Kerry told reports that "We don't know any details about it, but obviously the initial reports represent tremendous tragedy, loss, and we extend our condolences to the families and all those concerned."

Kerry spoke Saturday while on a visit to the former Soviet republic of Kyrgyzstan.

Egyptian officials say all 224 people — 217 passengers and seven crew — on the Metrojet flight were Russian and there were no survivors in Saturday's crash in the Sinai Peninsula.

Several Egyptian military and security officials say there are no survivors from the Russian passenger plane carrying 224 people that crashed into Egypt's Sinai Peninsula.

The officials all spoke to The Associated Press on condition of anonymity because they were not authorized to brief the media. Aviation experts have reached the crash site near the city of el-Arish.

Officials say all the victims in Saturday's Metrojet plane crash were Russian citizens.

Egypt's civil aviation minister says an investigative team has arrived at the Russian plane crash site in the Sinai peninsula to examine the debris and try to locate the flight's data and cockpit voice recorders, commonly known as the black box.

Egyptian officials say the pilot of the Russian airliner that crashed early Saturday had reported technical difficulties and wanted to make an emergency landing before losing contact with air traffic controllers.

Adel Mahgoub, chairman of the state company that runs Egypt's civilian airports, said the plane had successfully undergone technical checks at Sharm el-Sheikh's airport before taking off. He said experts were going there to view security camera footage of the Metrojet plane at the airport.

The plane, carrying 217 passengers and 7 crew, all Russians, went down in an area where Egypt has been fighting an Islamic insurgency.

The Kremlin has declared Nov. 1 a day of mourning for those who died in a Russian plane crash in Egypt's Sinai peninsula.

Adel Mahgoub, chairman of the state company that runs Egypt's civilian airports, said all 217 passengers and seven crew on the Metrojet flight Saturday from Sharm el-Sheikh in Egypt to St. Petersburg were Russian citizens. The plane has crashed but there is no report yet on any death toll.

Russia's Premier League says all its soccer matches this week would begin with a minute of silence for the crash victims.

Roughly three million Russian tourists come to Egypt every year — nearly a third of all of the country's visitors in 2014 — mostly to Red Sea resorts in Sinai or in mainland Egypt.

Authorities say the plane was carrying 217 passengers and 7 crew members from the Egyptian city of Sharm el-Sheikh, a popular tourist resort for Russians, back to St. Petersburg.

Russia's Investigative Committee, the country's top investigative body, has opened an investigation into the crash of a Russian passenger jet in Egypt's Sinai peninsula for possible violations of flight safety procedures.

Committee spokesman Vladimir Markin made the announcement in a statement Saturday.

An Egyptian aviation official says the pilot of Metrojet Flight 7K9268 had reported technical difficulties early Saturday and planned an emergency landing at the nearest airport before losing contact with Egyptian air traffic controllers and crashing.

An Egyptian aviation official says the pilot of the Russian airliner that crashed in the Sinai Peninsula had reported technical difficulties before losing contact with air traffic controllers.

Ayman al-Muqadem, a member of the Aviation Incidents Committee, said the pilot had reported his intention to attempt to land at the nearest airport.

Plane tracking website Flight Radar said the flight disappeared from radar 23 minutes after takeoff. Egyptian authorities say it crashed in Egypt's Sinai peninsula. The crash site is in an area where the government is fighting an Islamic insurgency.

Egyptian authorities say the wreckage of a Russian passenger jet has been found in area where Egyptian forces are fighting an Islamic militant insurgency.

Egyptian security forces have been waging major operations against a burgeoning insurgency in the northern Sinai peninsula, including the city of el-Arish. Egyptian officials say the wreckage was found in the Hassana area south of el-Arish.

The long-restive northern Sinai has seen a spike in attacks targeting security forces since the military overthrow of Islamist President Mohammed Morsi in 2013.  An Islamic State affiliate has claimed responsibility for many of the deadly attacks.  The Egyptian government has restricted journalists' access to the area.

Russia's civil air agency is expected to have a news conference shortly to talk about the Russian Metrojet passenger plane that Egyptian authorities say has crashed in Egypt's Sinai peninsula.

Officials were gathering at a hotel adjacent to the St. Petersburg airport, where Egyptian officials say the plane was heading with 217 passengers and 7 crew members.

Egypt's Ministry of Civil Aviation has confirmed that a Russian passenger plane has crashed in the Sinai peninsula.

The ministry said earlier Saturday it had lost contact with a Russian aircraft carrying 217 passengers and 7 crew members.

A statement carried by Egypt's state-run MENA news agency says the plane took off from Sinai's Sharm el-Sheikh, a popular destination for Russian tourists, at 5:51 a.m. Saturday and disappeared from radar screens 23 minutes after takeoff.

It said the aircraft was bound for St. Petersburg in Russia. A search and rescue team is looking for the plane.